Why inflation presents a ‘golden opportunity’ for buyers

Economic news is not a place for the timid these days. Unemployment levels that rival those of the Great Depression, and just this week, Federal Reserve Chairman Jerome Powell projected a 6.5% decline in gross domestic product this year, as well as an economic recovery that is “some years” away. 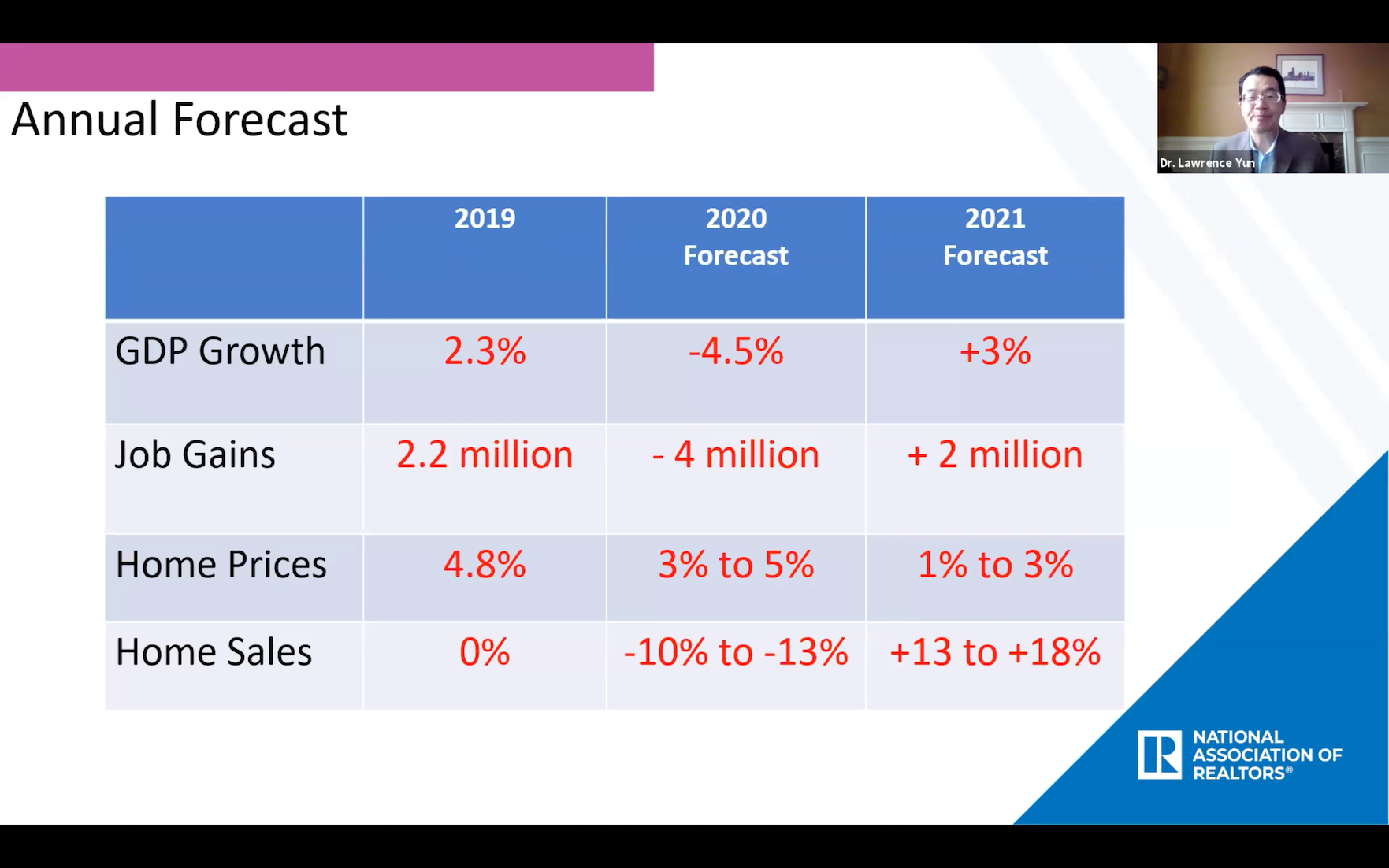 The National Association of Realtors’ economic forecast for the rest of the year, courtesy of Chief Economist Lawrence Yun

In a webinar presented by the Mainstreet Organization of Realtors Thursday, National Association of Realtors Chief Economist Lawrence Yun spoke to members in suburban Chicagoland about how the latest numbers will impact their business.

Yun said a possible shift away from urban environments in response to coronavirus fears would benefit MORe members. “Mainstreet, your geography certainly is one where you could benefit from this changing trend that is likely to occur,” Yun told webinar attendees.

In terms of recent news from the Federal Reserve, Yun said many economists are worried about the ballooning deficit and inflation, asking, “If you print a lot of money, isn’t that dangerous?”

Yun said that, in the short term, the United States won’t experience the inflation that other nations often do when they keep their economies afloat through government stimulus packages, due to the strength and near universal usability of our currency on an international level. “People accept and trust the U.S. dollar,” he said.

If the country does not deal with the deficit problem, there could be inflation in 2025 or 2026, he added. But he also stressed the importance of understanding what inflation means for real estate specifically.

“Higher inflation means real estate values will be rising. Rents will be rising,” he said. “There’s one thing that will not be rising five, six, seven years from now. And that is the mortgage payments of those who have locked in record-low mortgage rates.”

Yun said it’s in real estate professionals’ best interests to explain this to buyers and sellers who may be spooked out of the market by negative financial news.

The value of their homes will rise alongside other expenses, and their payments will decrease relative to their income, he said. “This may be one of the rare golden opportunities to buy if they can qualify,” he said.

While interest rates are quite low, Yun added that it’s possible they’ll dip further. Judging by the fact that the 10-year Treasury note — which tends to track mortgage rates very closely — is in the 1% range, ”It’s certainly a possibility over the next couple of months that mortgage rates may go down a little lower,” he said.

However, he did note that this will not have an impact on jumbo loans, which are becoming even more difficult to secure. That’s because government-sponsored enterprises Fannie Mae and Freddie Mac don’t secure such mortgages. “It’s adding to the difficulty of the luxury market,” which he noted Chicagoland has dealt with for a number of years now. “It may require some price reduction at the high end.”

Still, while CoreLogic has projected price declines for this year, Yun still held firm to his previous assertions about an increase, especially in Chicagoland. He noted that the economic expansion since the last recession, the longest in recorded history, still impacts the supply question. “From the low point to pre-pandemic, that’s about 500,000 net-new jobs created in Chicagoland, which was the reason why you had such a strong housing demand prior to the pandemic, especially for first-time buyers,” he said. “We are in a housing shortage, so don’t expect any price reductions.”