The level of builders’ sentiment remained steady at 47 in January, due in part to an uncertain political agenda in December 2012 that stalled the consecutive increase in builders’ confidence. Contributing factors included ongoing debates about government spending, potential cuts to housing tax incentives and an economy that continued to perform weakly. There is good news, however. Forward movement in homebuilding and homebuying is anticipated for 2013 due to recovering home prices in the majority of markets, pent up demand and low mortgage rates. 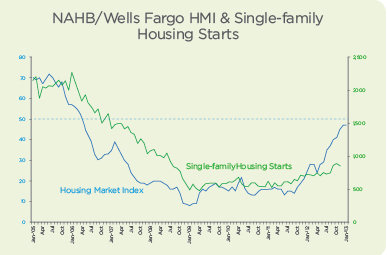