Active design principles led architects to create stairways that incentivized people to use them at the Harris School of Public Policy's Keller Center. Credit: Tom Rossiter

Residential developers and builders often take cues from the commercial construction industry when it comes to incorporating new environmental standards. That’s why we were excited to listen in on a recent forum organized by the Chicago Architecture Center that brought three architects together to share details of their projects and offer ideas on how developers, designers and builders can incorporate eco-friendliness in a more holistic way.

One may assume that drought-plagued California or sea-level-challenged New Orleans would be the locations where architects would stress the importance of water management. But just because Chicagoland has traditionally had such easy access to fresh drinking water, the region can’t be lulled into complacency on this issue.

“Water is the new frontier, and something that we really take for granted here,” said Gabriel Wilcox, an associate principal at Farr Associates, at the event. “Water [is something] you have to really hit at the policy level.”

Indeed, Wilcox’s company went the policy route when they found out that the water reclamation plan they wanted to execute for their redesign of the University of Chicago’s Keller Center was illegal in Illinois. They had to get special approval in order to collect rainwater in a cistern to be used in landscaping and for toilet flushing. Though it wasn’t easy, Wilcox noted that the process was “a really good thing to put on display in a policy school” like the Keller Center, and he’s hoping to see more projects challenge the conventional wisdom about water reuse.

Dynamism built into the walls 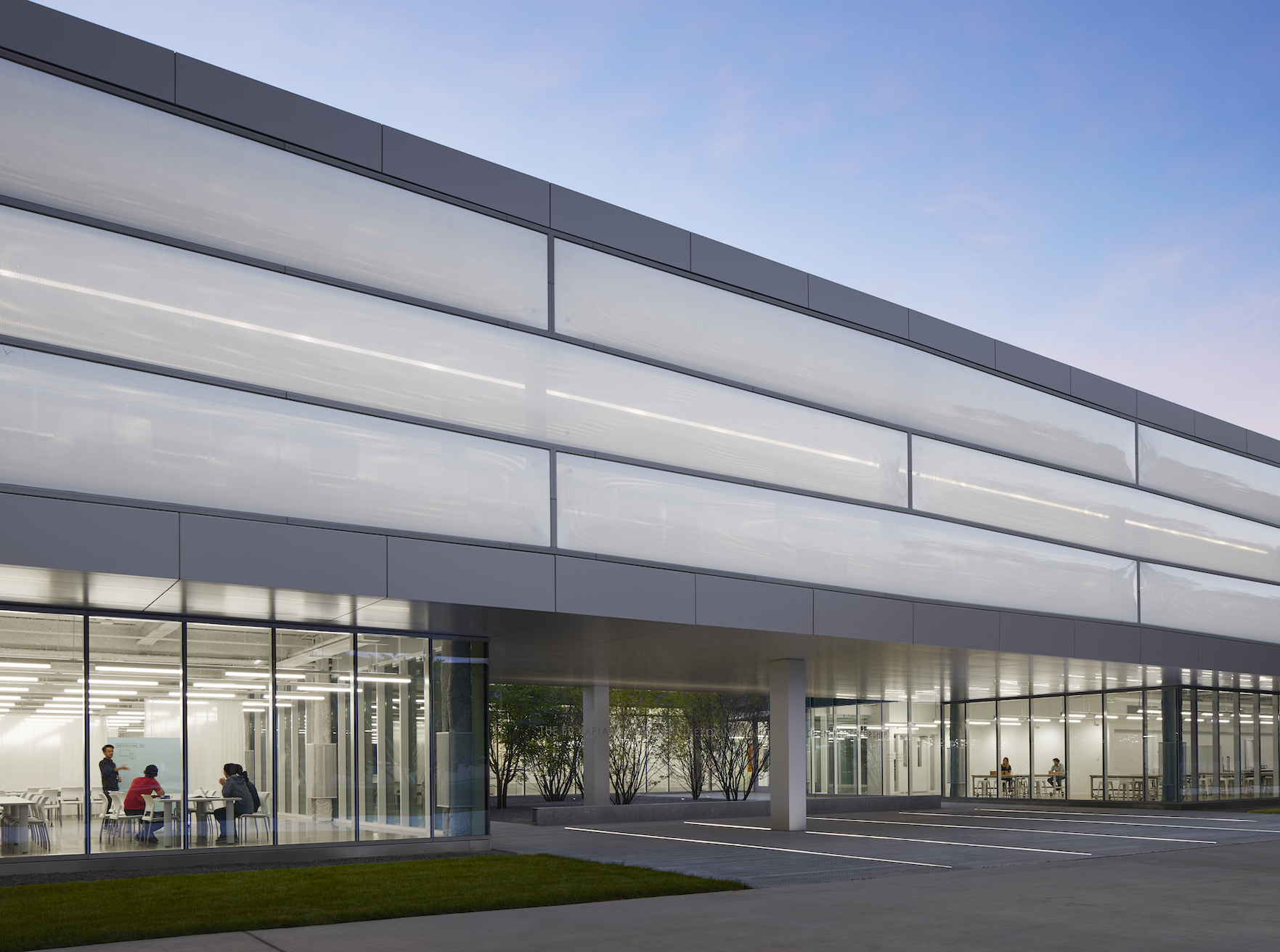 One of the best ways to control temperature is to manage how the sunlight streams into a building. This can be tough in structures like the Illinois Institute of Technology’s Ed Kaplan Family Institute for Innovation and Tech Entrepreneurship, designed by John Ronan Architects.

Marcin Szef, associate principal for the firm, explained that the building was conceptualized as “an ideas factory” where students and faculty from various disciplines could come together and see how others were working on big problems. This, along with the plan to allow people in the interior public courtyards to be able to watch much of the activity in the building without actually entering it, required a lot of glass. “The entire building becomes a display case for what’s happening,” Szef told attendees.

The question became how to heat and cool the building in a low-cost, sustainable way. Thanks to a weather station parked on the roof, the building management system would “know” when the sun was shining. So designers connected the station to a dynamic exterior that can pneumatically shift foil cushions sandwiched between transparent panels to block some sun when solar radiation is especially intense, but that can shift again to make the walls more transparent at night or when it’s cloudy. “The building facade is actually helping the mechanical system not work as hard,” Szef said. “You’re still getting that human comfort so it’s not closing off the daylight.”

Addressing the needs of the community

Part of building more sustainable structures in Chicagoland requires coming to terms with a sometimes ugly past. Dan Rappel, director of sustainable design and principal at Chicago-based architecture firm KOO, said his company’s work to create the Altgeld Family Resource Center on the South Side did just that. Surrounded on virtually all sides by brownfields, the Chicago Housing Authority neighborhood of Altgeld Gardens Homes is sometimes called “the toxic donut,” said Rappel. “It’s unfortunately part of the racist legacy of the city.”

Indeed, the most expensive part of the soon-to-be LEED Gold-certified project, which includes a library, daycare, gym and outdoor playground and makes use of 32 geothermal wells and radiant floor heating, was actually the brownfield remediation, according to Rappel.

But addressing community needs isn’t just about the physical structure and its surroundings. All three panelists underscored the need for all developers to continually engage current residents in terms of asking how locals envision new developments serving their community, explaining how sustainable features will work, and soliciting input on how to put a hyperlocal spin on spaces. For example, Rappel noted that KOO incorporated photography from Englewood-based artist Tonika Johnson, whose grandparents lived at Altgeld Gardens, to bring life to the building’s windows.

While it’s a phrase most developers wouldn’t want to repeat, environmentalists often assert that the greenest building out there is the one that’s already built because it doesn’t require any materials to be harvested or manufactured.

This approach was especially important for the Keller Center rehab project, because Farr Associates worked toward achieving the International Living Future Institute’s Living Building Challenge. “It’s probably the most impossible certification system to achieve,” Wilcox said, because it calls on a building to “give more to the earth than it takes.”

Both Wilcox and Szef used trees that were dying of emerald ash borer infestation in their interior designs. The Keller Center made use of old Chicago Public Schools chalkboards and added new LED bulbs to disused light fixtures to update them for the repurposed spaces. “Salvaged materials became a big part of the project,” Wilcox said. Because existing elements have already been manufactured, “you don’t have to include it for the red-listed ingredients” that would count against the Living Building Challenge certification.

Upping the ante for the future

The three architects also addressed the need to keep pushing for advancement in the construction industry in terms of sustainability. Rappel cautioned attendees at the event against putting too much stock in the jargon of the green building industry and stressed the importance of turning lofty certifications into everyday standards. “Net-zero ready really is kind of a cheat. … Any building is ‘ready’ if you can overload it with enough [photovoltaic solar] panels,” he said, adding that there’s no reason all buildings can’t be classified in this way. “It’s important to continue to have the city up the ante on PV requirements and higher levels of energy code compliance.”

Szef said that one of the elements he’d like to see more builders adopt is simply employing a full, continuous layer of insulation in the exterior facade of new structures, noting that the initial construction phase is really the best time to create a tight building envelope, and that any break in insulation has an outsized negative effect on energy efficiency. “We’re trying to get more contractors to get on board with that,” he said.

The way occupants use buildings is also an important element for architects to design for. Wilcox noted that when his team redesigned the main staircase of the Keller Center, they specifically added features that incorporated “active design” — in this case, making the space large enough to encourage serendipitous interaction and conversation, and incorporating lots of natural light — that would encourage people to take the stairs more often. “We want to make it intriguing,” he said. “That’s intentionally done, to make you use it.”