Housing segregation went beyond limiting the housing options of African Americans – additionally, it bred poverty, a process that, Satter explained, contradicted conventional wisdom on the topic.

“What I’ve found is that after WWII and into the ‘50s, income was actually quite close between whites and blacks in some areas of Chicago. It was sometimes almost the same,” Satter said. “That’s one of the lies out there, that black people had poor housing because they were poor. It’s actually kind of the reverse.”

That “reverse” was the high cost of housing, which pushed many black families into poverty and, with city services such as sanitation and garbage collection lacking, led to the decay of neighborhoods.

The FHA’s promise not to insure loans issued in “D”-graded districts – which again, were the lowest-rated districts in the agency’s grading system – kept banks from lending to black families, which left two housing options for the city’s underserved minorities: buy a house on contract directly from the seller or rent in the city’s increasingly crowded, segregated neighborhoods. 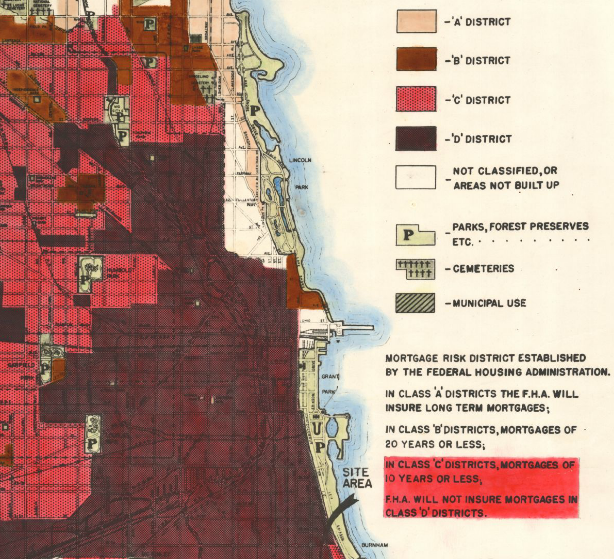 A 1938 redlining map from the Federal Housing Administration; all ‘D’ districts, which had majority-black populations, received no mortgage assistance from the government.

Overpopulation – thousands of African Americans were moving to Chicago each month at the peak of the Great Migration – coupled with a housing shortage and lack of protections for minority tenants allowed rents in Chicago’s predominantly black neighborhoods to overtake those in white neighborhoods. Tenants often paid twice the rent charged to whites. A University of Chicago researcher of the time who studied tenement life in the city, Edith Abbott, wrote in “The Tenements of Chicago” that despite families living “without light, without heat, and sometimes without water…the rents in the South Side Negro district were conspicuously the highest of all districts” she had visited.

With no promise of eventual ownership, many in minority neighborhoods opted instead to partake in “contract buying,” meaning they purchased contracts with independent home sellers who set both the terms and price. In his reporting on the topic, journalist Ta-Nehisi Coates described contract lending in Chicago as “a predatory agreement that combined all the responsibilities of homeownership with all the disadvantages of renting – while offering the benefits of neither.”

The white contract sellers were speculators, purchasing cheap homes in previously white neighborhoods and then flipping them to desperate black families after marking up the price, creating unregulated profit pits. “They would double the price of the home when they sold it,” Satter recalled, “sometimes quadruple it.”

Once a home was purchased on contract, the monthly payments did not translate into earned equity. Tracey Taylor, president of the Dearborn REALTIST Board (DRB) – which African American real estate professionals formed in 1941 to secure the right to equal housing opportunities for Chicagoans, regardless of race, creed or color – explained the high stakes: “If one payment was missed, the owner could and would foreclose on that agreement, and it would be confirmed through the courts. This was a common practice on the South and West Sides of Chicago.”

And the reason for the missed payment did not matter to contract sellers.

“Imagine signing a [contract] agreement,” Taylor said. “Something goes wrong in the property, and the white owner refuses to make the repair, so you make the repair and miss a payment. You are then taken to court and evicted on the spot. What kind of business practice is that to be subjected?”

Worst of all, while contract buying left black families vulnerable, it also proved highly profitable for the contract sellers. In a 1962 edition of The Saturday Evening Post, one contract seller was quoted as saying, “If anybody who is well established in this business in Chicago doesn’t earn $100,000 a year, he is loafing.”

Satter’s father, Mark J. Satter, was a prominent civil rights lawyer who represented many black families targeted in contract buying schemes. During the era of contracted homes, Mark Satter estimated that approximately 85 percent of black home purchases in Chicago were on contract, and calculated that Chicago’s speculators were robbing the city’s black population of $1 million a day.