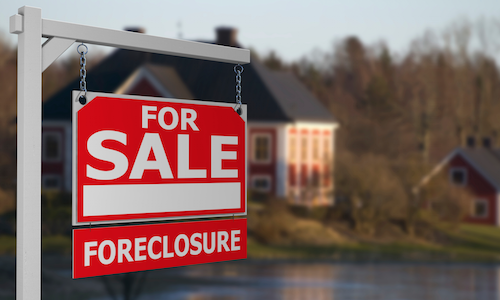 In a market still reeling from an onslaught of foreclosures dating back early a half-decade, any news of foreclosures that approaches negative is likely to put the industry on edge, which is why RealtyTrac’s report finding increased foreclosure activity in April is a significant reveal. However, before agents work themselves into an anxious frenzy, it’s important to note the 3 percent increase, which marks an 18-month high, was largely driven by an influx in bank repossessions.

REOs jumped a whopping 50 percent from April 2014 to 45,168, a 27-month high and the second consecutive month of year-over-year increases, according to RealtyTrac. Also, the ratio of foreclosed homes to standard housing units was one for every 1,049, compared to one for every 1,295 in February – up 8.67 percent from the same time last year.

The surge in REOs drove overall activity stats up to their 3 percent increase, but looking closer at foreclosure starts and forthcoming activity, the numbers are far less daunting.

Foreclosure starts, for instance, were down 5.2 percent year-over-year.

As we move further into 2015, RealtyTrac’s data shows that, in April, 46,777 properties were scheduled for Auction nationwide, which, while a considerable figure, is substantially less than in March (down 8.0 percent) and April 2014 (down 5 percent). The downward trend marks another stride in the crawl towards longer-term sustainability.

In Illinois, a judicial state where foreclosures require an official judgment, a wave of foreclosures seem ready to hit the Land of Lincoln. With 2,676 homes in the beginning litigation stage of the process, and more than 2,200 already approved and scheduled for auction, an influx of foreclosed properties is expected to hit the market later this year.

Foreclosure starts were also up year-over-year, rising 2.76 percent to 2,676. But a small silver lining was found in completions, which totaled 2,664, a 45.65 percent increase from the same time last year. The bump in completions indicates a certain haste from lawmakers and influencers to usher the process along.

On the national stage, RealtyTrac’s findings were relatively positive once boiled down, but the trend was not uniform from state to state. The report revealed:

While the REO influx was considerable, it wasn’t particularly surprising, as the surge was foreshadowed by a 23-month high in scheduled foreclosure auctions last October, according to RealtyTrac Vice President Daren Blomquist.

“Many of those scheduled auctions are now taking place, and properties are going back to the foreclosing lender,” he said. “Meanwhile we continue to see foreclosure starts decrease, and foreclosure starts nationwide are now running consistently below pre-crisis levels – indicating that the overall increase in foreclosure activity in April is a continuation of the clean-up phase of the last housing crisis, not the start of a new crisis.”

In recent years, a backlog of distressed sales coming onto the market would have a “stifling effect,” Blomquist pointed out, but as several inventories are running dry and affordability evaporating with it, an outpouring of available properties, albeit distressed, could actually work to stimulate sales in the middle to lower ranges of the market.

Blomquist added: “Banks are liquidating these distressed properties in a seller’s market with a low supply of inventory for sale, which should help them sell quickly and at a prive that is relatively close to full market value.”