The Scoop on REOs and Short Sales in 2015 Short sales and REOs are statistically at an all-time low, but in Illinois, does that mean we will start to see less and less of them? Not exactly.

Bert Gor, short sale specialist with RE/MAX Professionals Select, has “a lot of eggs in one basket” working with only short sales and REOs. Around this time last year, he thought that his business might change due to the lower number of foreclosures being reported. However, while the statistics are accurate, Gor’s business is still booming, and he explains why: “In recent years, people in stages of foreclosure are more knowledgable about how they work; they know it takes a very long time for a foreclosure to go through the system,” he says. “Illinois still has a lot of these people who are so underwater, that even though the market has changed for the better, it doesn’t help people who are already underwater. That’s how upside down they are – they haven’t made a payment in years.”

And while it’s true that there are fewer and fewer REOs and short sales happening, the number of both of those still occurring is staggering, Gor says. Illinois is consistently in the top five states with the most foreclosures. With these homeowners now understanding how the foreclosure system works, Gor says REOs will be working their way through the system for at least a few years. For example, Gor has three different clients currently who haven’t paid since Dec. 2012, May 2011 and Dec. 2009, and each of those clients have just this month finally had their auctions scheduled. It has taken about four years for Gor’s client who hasn’t made a payment since 2009 to make it through the system.

There are still steps homeowners can take to avoid a foreclosure, even if a foreclosure filing has been made or a foreclosure was scheduled. Each county has different rules about how much time it will take to actually be foreclosed upon. Gor was contacted by a party who was foreclosed on Nov. 26, but in Cook County, it could take three months for the confirmation hearing (confirming the foreclosure), to happen, and until that occurs, the bank can’t take possession of the home. However, in DuPage County, it’s only taking the courts about 30 days to get to the confirmation hearing.

In addition, at press time, it was looking like the Mortgage Forgiveness Act will be extended again, and it will be retroactive at the beginning of 2014. While this is good news, given the amount of REOs Illinois has, there is a misconception that this act applies to all homeowners going through a foreclosure. In actuality, the MFA only applies to forgiven debt on money that was used to “buy, build or substantially improve your principle residence.” It does not apply to forgiven amounts (by the short sale lender or through restructuring) that were part of a refinance or HELOC that increased the initial balance borrowed to purchase the home. 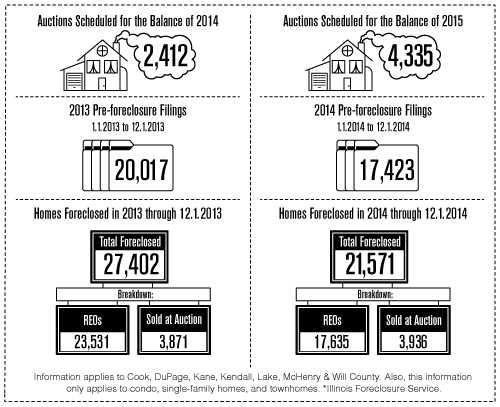