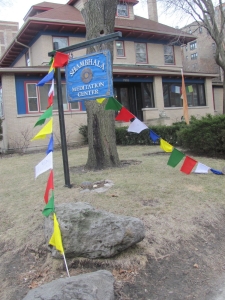 Residents of Rogers Park protested outside the Shambhala Meditation Center to protest Jennifer Pritzker’s plan to build a parking garage on the land.

Residents of Rogers Park protested outside the Shambhala Meditation Center on Sunday to express their disappointment with a plan to build a parking garage on the land, according to DNAinfo Chicago.

Jennifer Pritzker, CEO of private wealth management firm Tawani Enterprises, purchased the Buddhist meditation center last year and wants to build a 250-car parking garage in its place, and the residents are not pleased.

The 49th Ward alderman, Joe Moore, approved a zoning change that would allow the structure to be built. It has been reported by DNAinfo Chicago that he said that the neighborhood is in need of parking, and Pritzker’s development would be a “once in a lifetime opportunity.”

However, the protesters believe this zoning change could encourage more high rises to be built, the exact opposite of what they want. They also don’t like that the city is promoting parking garages instead of more environmentally friendly options, such as public transportation or bikes.

“Pritzker thinks a parking garage is a solution to our problems. [Pritzker] couldn’t be more wrong,” protestor, Don Gordon, told DNAinfo Chicago on Sunday. “A solution is less cars.”

No further decisions will be made until this Friday, where a proposal will be heard by the Zoning Board of Appeals and Chicago Plan Commission at City Hall.