Though sales dropped nationally last month, the picture was a bit brighter in Illinois. Existing-home sales in Chicagoland were up 4.2% over this time last year and increased 8% over the previous month according to the latest data from Illinois Realtors. 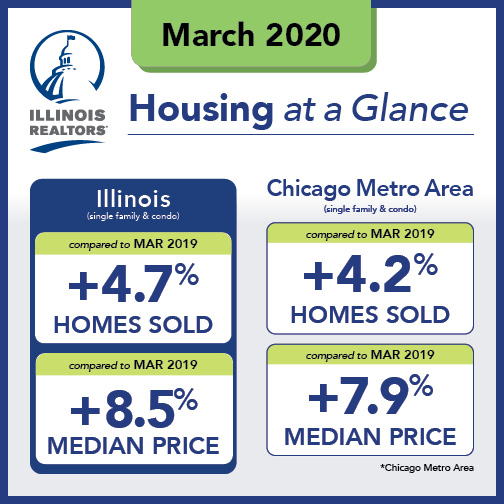 Still, supply took a deep dive. Available inventory in the metro area totaled 30,980 homes in March, a 10.7% decline from this time last year. Prices increased accordingly, up 7.9% from last year to a median of $260,000.

Though sales increased at a more modest year-over-year pace in Chicago of 1%, price increases in the city were even more pronounced than they were at the metro level, up 10.1% over last year.

“Clearly, demand kept pace, despite the pandemic, with an uptick in closed sales and sales price over last year. However, we also saw a sharp decline in inventory, something we will continue to keep our eyes on for the future, as homeowners react to the uncertainty of the current environment,” Chicago Association of Realtors President Maurice Hampton said in a press release. “Though we likely won’t see a fuller picture of coronavirus’ impact on the housing market until April’s numbers are released, we are happy to see positive momentum in March.”

Because Gov. J.B. Pritzker’s shelter in place order went into effect in the third week of March, it may not be until April that the true impact of the COVID-19 pandemic shows up in the numbers. Geoffrey J.D. Hewings, director of the Regional Economics Applications Laboratory at the University of Illinois, suggested real estate professionals watch consumer sentiment indices for an indication of what future activity will look like.

“The March data on the housing market are probably the last to reflect the pre-pandemic impact of the economy,” Hewings said in a statement. “Over the coming months, we can expect to see a growing negative impact on housing prices and sales.”

The Mainstreet Organization of Realtors noted that, in the suburbs of Chicago, detached single-family home sales did increase slightly over last year by 2.1%. But forward-looking data points to a difficult April; the number of detached homes going under contract in March showed a 7% decrease from last year. Here’s a look at how this is playing out across MORe’s service area: