While sales of previously owned homes continue to underwhelm, housing market analysts are feeling more optimistic about sales of newly-built homes. The U.S. Census Bureau reported new-home sales in June came in at a seasonally adjusted annual rate of 646,000. That’s 7 percent above the revised sales pace for May, and 4.5 percent above the Bureau’s estimate for June 2018.

With an estimated 338,000 newly-built homes for sale at the end of the month, the market’s supply stands at about 6.3 months’ worth at the current sales pace, indicating a good balance between supply and demand. That level of inventory is also 9.4 percent higher than a year ago. The median sales price for new homes came in at $310,400, 2.3 percent higher than a month ago but virtually unchanged from last year.

The June report came with caveats, however, namely downward revisions to sales estimates for previous months and a wide margin of error on the last two estimates. That means the last three months of new-home sales may have come in weaker than previously thought.

“Despite a positive headline figure, June’s new home sales are a wake-up call for a sector that enjoyed an otherwise solid start to 2019,” wrote Zillow economist Matthew Speakman. “Sale counts are still ahead of where they were last year, but each of the three previous month’s releases were revised down, inflating the appearance of June’s monthly gain.”

It’s not all bad, but it could be better for the housing market. With home construction activity continuing to slow, any growth in new-home sales going forward is expected to be modest at best. On the other hand, given the characteristic uncertainty in the Census Bureau’s reporting, the market could just as easily surprise to the upside.

“New home sales have room to grow, but at a gradual pace,” Speakman wrote. “Clearly, it’s important not to glean too much from a single month’s report, given that this series is subject to frequent revisions.” 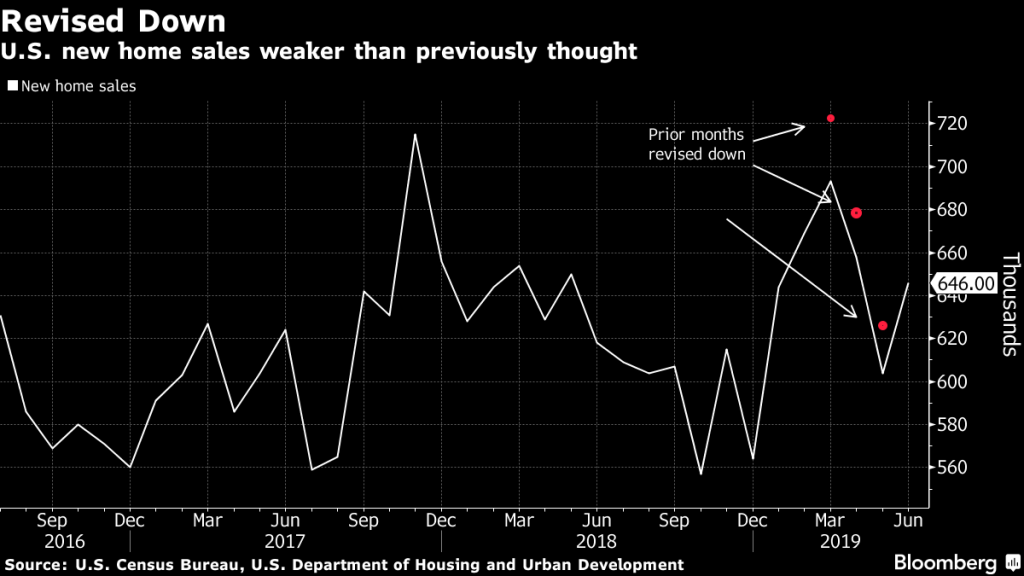