From closing to campaigning: Local agent throws hat in the ring for aldermanic race 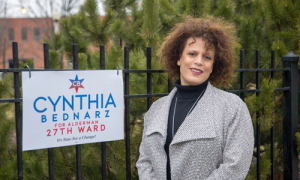 Cynthia Bednarz of d’aprile properties has been knocking on doors in the real estate business for about a decade. Now, as a candidate for alderman of the 27th Ward, she’s knocking as a candidate for elected office. “Volunteering and advocating have always been part of my lifestyle,” said Bednarnz, who announced her intention to run last year and is challenging six-term incumbent Walter Burnett, who would otherwise run unopposed.

After moving to her East Garfield Park home back in 2000 — where she now lives with her husband and two school-aged daughters — Bednarz helped revive a block club that had fizzled out. She volunteers at her kids’ elementary school and last fall, she also started a softball league for anybody — from the local neighborhood or not — who wanted to get together in a park in a nearby neighborhood and be active together.

The idea to run, she insisted, wasn’t hers alone. Two former aldermen approached her, she said, and suggested that she consider running.

The campaign, she said, is rooted in local considerations and issues. The crucial one that drew her into the race was what she saw as a need for more affordable housing and mixed-income development that could help attract new businesses to the western parts of the ward — the neighborhood where she’s raising her family and owns a home.

The 27th Ward is among the city’s most economically diverse, and includes parts of struggling East Garfield Park, as well as the booming Fulton Market District and portions of the Gold Coast. These neighborhoods are among those that have seen a surge of new development in recent years, from Google’s Midwest headquarters opening in Fulton Market in 2015 to new mixed-income residential buildings in and around the former site of the Cabrini-Green housing project on the Near North Side.

“This new development hasn’t necessarily benefitted every part of the ward,” Bednarz said. Unlike in other parts of the ward, “west of Western Avenue, there’s been a lot of [aldermanic] resistance to new development, and it’s meant that new businesses often aren’t interested in coming to the area. That doesn’t have to be the case.”

It’s issues like these that drove her to run, Bednarz said, rather than the growing number of women of color running for and winning elected office at the state and national level. But, she said, “Any time you create diversity within an organization, it just makes it stronger.” Out of the Chicago City Council’s 50 aldermen currently serving, 14 are women.

Bednarz readily acknowledged that running for office isn’t for everyone. But the lifestyle of a real estate agent can lend itself to the rigors of campaigning — even if it isn’t always easy. “Partially because I’m a real estate agent, I’ve been able to fit this into my schedule. If you have a typical nine-to-five job, doing this would be extremely difficult, but I was able to balance it,” she said, before a pause. “‘Balance’ might be the wrong word. ‘Undertake’ might be a better word.”

And undertake she does. Bednarz said since she’s been on the ballot, she has regularly been putting in days as long as 18 hours, juggling showings and closings with flyering and door-knocking. But she does it all with a goal firmly in mind. “If I didn’t think I could win, I wouldn’t put in the 18-hour days.”

The days might not get much shorter if she wins the election. Many aldermen maintain businesses outside of their elected positions, looking at serving as alderman as a part-time job. Bednarz said her plan, if she wins, would be to invert that common splitting of time, and practice real estate part-time. “If I had the opportunity to serve, I’d give it the time it really deserves. There’s a lot to be done around here.”

The long days of the past several months have included some encouraging interactions. Bednarz described one day out and about in the neighborhood, in which half the people who opened their doors after she knocked thanked her for running. There was even a hug.

It’s the kind of warm reception she attributes to having longstanding ties in the neighborhood and knowing it well. “As a real estate agent, part of what you want to do is be a resource for your clients, helping them to become more familiar with services, people and organizations that can do positive things for them. Being an alderman is really just doing that on an even higher level.”