The Contradictions of Affordable Public Housing

In the decades that followed the FHA’s creation, poverty became endemic in Chicago’s overpopulated inner city. By 1960, the poverty rate for African Americans in Chicago was 29.7 percent, compared to just 7.4 percent for whites. And the case was nearly identical in Seattle, Baltimore, New York and every major U.S. city with significant minority populations, as black families were put at a significant economic and social disadvantage.

In response to what the federal government at the time saw as the decline of great American cities like Chicago, a strategy for urban renewal was written into legislation, called the Housing Act of 1949. It was the order that helped build a ghetto within Chicago’s ghetto.

The general welfare and security of the Nation and the health and living standards of its people require housing production and related community development sufficient to remedy the serious housing shortage, the elimination of substandard and other inadequate housing through the clearance of slums and blighted areas, and the realization as soon as feasible of the goal of a decent home and a suitable living environment for every American family.”

Where “the Nation” was written, the legislation meant “whites only,” and where it promised the “clearance of slums and blighted areas,” it really meant the “use of eminent domain to seize and destroy black neighborhoods.” As Harvard University’s Alexander von Hoffman wrote in his analysis of the 1949 act: “Its history is studded with contradictions. Through its public housing program, the act provided housing for low-income families; through its urban redevelopment program, it cleared slums and destroyed affordable housing units.”

Chicago’s Lake Meadows, a middle-class housing complex erected over the remains of a once-black neighborhood, is a perfect example. It was transformed into a place its former residents could no longer access. 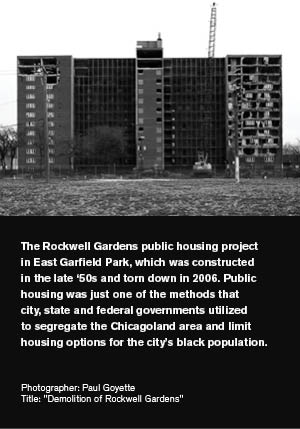 The building was constructed by a private developer, who paid only a fraction of the $16 million it cost to “clear” the land, as Satter put it. The city’s Land Clearance Commission paid more than $12 million to assist the project. The commission wanted the neighborhood, which was close to the city’s downtown, gone.

Chicago used the Housing Act to scrub the red from its maps, turning “D” slums into “A” neighborhoods. In doing so, the city displaced thousands of black families – who it promised to re-house – exacerbating its already considerable population problem. Each city council member had veto power over the placement of new public housing developments in their wards – meaning that aldermen of majority-white precincts refused to allow public housing construction in their areas. Additionally, the Illinois Relocation Act – a companion to the Redevelopment Act – allocated only enough money to build new public housing for 15 percent of the displaced. In justifying its decision to fund so few, Satter wrote that the legislature argued “the remainder of the displaced would find housing without aid from the state.” So they ended up in packed public housing buildings in already overcrowded neighborhoods.

“There was vacant land in white areas, enough so that you would not have had to displace people,” Satter said. “But instead they built in already overcrowded black neighborhoods where they would have to displace even more people to build public housing for displaced people. Segregation was more important than housing people.”

J.A. Stoloff, of the U.S. Department of Housing and Urban Development’s Office of Policy Development and Research, wrote that by the ‘60s, Chicago public housing was among the “most segregated” in the country, and that “the situation in Chicago exemplifies the problems caused by racial segregation.”

When the Fair Housing Act was enacted in 1968, housing segregation through the traditionally legal avenues of redlining and lending discrimination became outlawed. While this came as a welcome change, it still failed to address the residual effects of policies and practices that had defined homeownership in Chicago for nearly a century. It did not, for instance, reverse the damage of blockbusting. The stigma of a black family in the neighborhood was not erased. The act could not dismantle the interstate roadways Chicago Mayor Richard J. Daley had used to cut through slums.