When Black Was Red

Although local covenants and ordinances were the seeds of housing segregation in Northern cities, it was ultimately the federal government that made it an issue of national policy.

“CREB created a pattern for Realtors to segregate, but the real issue was federal policies and how they worked,” Satter explained.

In 1933, newly elected President Franklin D. Roosevelt created the Home Owners Loan Corporation (HOLC), both as part of the New Deal and as an answer to the economic collapse of 1929. Lending schemes in early 20th century America were very different from what consumers encounter today, requiring borrowers to put down anywhere from 30 to upwards of 80 percent of the home’s cost, all with an understanding that the remainder would be paid off in the five to 10 years that followed. Interest rates were sometimes double or triple what they are today.

There were no federal agencies designated to track foreclosure rates in the beginning of the Great Depression, but estimations often compare levels to those seen during the mortgage market’s collapse in 2007. FDR used HOLC to combat the high rate of foreclosures and provide an easy route for homeowners to refinance their mortgage. But in order to lend, the corporation needed a means to assess risk – or as Satter put it: “In order for the HOLC to make a loan, they first had to define poverty.”

That need for definition marked the beginning of redlining.

“The HOLC brought in local real estate professionals to do the appraisals,” Satter said, explaining how the HOLC began diagnosing financial risk. “And because it was 1933, many were explicitly and overtly racist. The associations were still whites-only at the time.”

To standardize risk assessments, the HOLC established what was ultimately a parochial rating system from the recommendations of local appraisers, which cataloged neighborhoods into four categories: green, blue, yellow and red. Green represented a “homogenous” neighborhood (i.e. white) and the best option for writing a loan, while red reflected a “hazardous” neighborhood, which was almost certainly populated by black families – hence the term “redlining.” Apart from its correlation to race, the system was arbitrary.

The scope of HOLC was limited: it was only created to help refinance mortgages in default. It was not until the National Housing Act of 1934, which created the Federal Housing Administration, that the HOLC’s risk rating system became the sole basis of evaluating risk for all loans.

“It was ugly; it was arbitrary; and it became national policy,” Satter said. 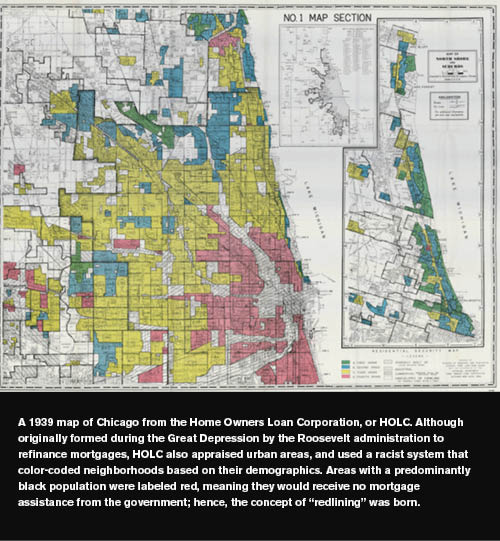 The primary goal of the FHA was never to keep people in their homes, she explained. The administration’s mission was to “jumpstart the housing industry,” a much broader purpose than the HOLC’s.

“The FHA adopted the risk ratings established by the HOLC, but their agendas were different,” she said. “It wasn’t to give loans directly; it was to insure loans that banks made. It gave banks a safety net so that they would make more loans. The idea was that safer loans meant housing starts would go up again.”

It worked, in a sense. The FHA amortized loans, allowing borrowers to pay off principal and interest over longer periods of time. It encouraged home purchases, and eventually led to the fixed-rate mortgages that are so commonplace today. But in adopting the HOLC’s color-coded rating system (which was then converted to an A-B-C-D grading system), the FHA effectively condoned segregation through lending at a federal level.

“The administration insured loans based on guidelines that were built on a racist appraisal system,” Satter attested. “Even a very well-maintained African American neighborhood could still be rated D, regardless of who was living there, the condition of the homes or the creditworthiness of the people.”

Similarly effective were the FHA’s policies on new construction. Following World War II, the FHA financed mass production of subdivisions across the country, but the agency’s concessionary loans to builders came with a condition – that no homes in the subdivisions be sold to African Americans.

Redlining was not legally barred until the passage of the 1968 Fair Housing Act, but by that point, nearly the entire South and West Sides had been cordoned off as too high a mortgage risk for the FHA to insure loans in those areas – which led to banks not issuing them.

And redlining was not the only force at work orchestrating segregation. Building on its earlier policies of segregated block clubs,  the National Association of Real Estate Boards actively warned its members against the dangers of housing African Americans.

In a 1943 brochure, the National Association of Real Estate Boards wrote that black buyers should be avoided as they may be a “bootlegger,” or a “madame who had a number of Call Girls on her string,” or a “gangster” looking for a “screen for his activities.”

“No matter the motive or character of the would-be purchaser, if the deal would institute a form of blight, then certainly the well-meaning broker must work against its consummation,” the brochure read. Until 1950, the National Assocation of Real Estate Boards’ code of ethics contained the following canon: “A [sic] realtor should never be instrumental in introducing to a neighborhood a character of property or occupancy, members of any race or nationality, or any individual whose presence will clearly be detrimental to property values in the neighborhood” (click here to see how those policies changed the demographics of Chicago’s neighborhoods).