A Decade of Cash

The last decade as seen the rise of cash sales. Now some believe we’re seeing the fall.

Over the last decade, the portion of all-cash sales has fluctuated wildly, largely on account of the initial expansion of the housing bubble and its subsequent collapse.

Looking at the graph below, generated using Redfin data, it’s easy to see that prior to the last half of 2008, cash sales typically hovered between 25 to 30 percent. However, during the housing boom, an influx of investors looking to make a quick dollar off ascending home prices began flooding the market with cash, buying up huge swaths of properties and then later selling them for a profit.

Well, the housing market crashed nearly six years ago, and still cash sales, while dropping, are playing a significant role in the market. The reason? Tight lending standards. Buyers who have the ability to pay in cash will continue carrying out transactions as such because: 1. You can avoid the costs associated with financing, like interest; and 2. A cash offer will almost always beat a competing offer reliant on financing. In other words, if you want your dream property and you’re in a tight market, cash is the best bet.

Still, the portion of cash purchases in the national housing market has dropped considerably over the last year, and especially since their 46.2 percent peak in January 2011, which many believe marks the beginning of a return to a more balanced market. 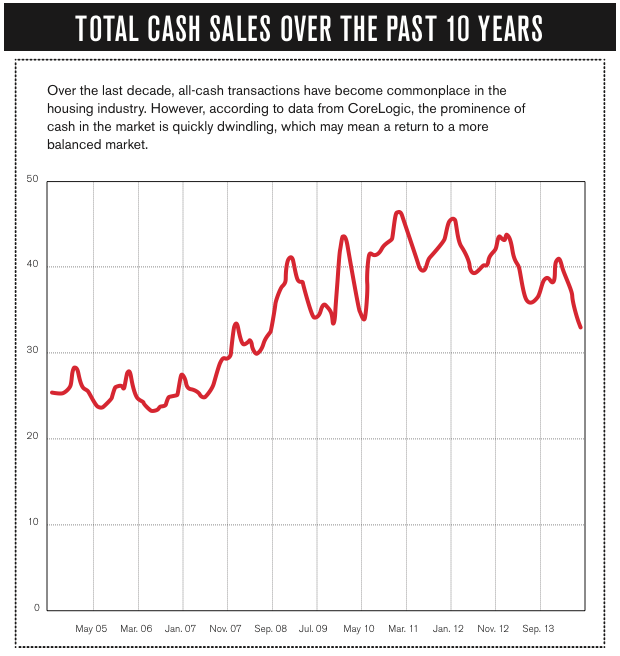