A Historical Perspective on the Current Real Cost of Mortgage Debt

Conventional wisdom generally says that households should typically avoid debt and that retirees should pay off any remaining mortgage debt at the time of retirement. Does it hold up today in a period of very low real and nominal interest rates? The cost of borrowing drives this decision, as do current inflation forecasts and expectations for investment returns.

At the same time, Treasury markets are pricing U.S. breakeven inflation for the next five and seven years at 1.82 percent and 2.01 percent, respectively. In real terms, that means market participants expect 5/1 and 7/1 ARM loans with the lower initial rates to cost a household between 0.7 percent and 1 percent annually during the course of that initial rate period. That’s basically the lowest real cost of borrowing households have been able to access in at least a decade (see the graph below). We don’t have ARM mortgage and inflation expectations data going back further than 2002, but it’s reasonable to think these represent near all-time lows in regards to cost. 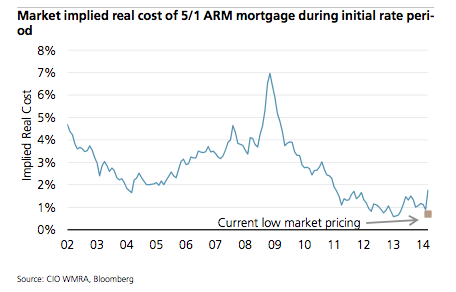 Of course, if inflation winds up being higher than those estimates, the household would end up paying less in real terms, whereas if inflation is lower it would pay more. This comparison also ignores any tax-benefits derived from mortgage debt that ultimately lower the effective cost of the loan.

In regards to investment returns, a five-year Treasury bond currently yields 1.7 percent, and a seven-year Treasury bond currently yields about 2.3 percent. Clearly, it wouldn’t make sense to borrow in order to simply continue to hold Treasury debt. Municipal bonds and high yield corporate debt offer a slightly more attractive proposition. The taxable-equivalent yield to worst on the Barclays Municipal bond Index stands at more than 6 percent for top-bracket taxpayers, and the yield to worst for high yield corporate debt is currently 5.2 percent.

Finally, forward-looking returns for equity markets are the most difficult to estimate because of the volatility inherent in those markets. The UBS forward-looking capital market assumption for U.S. equity is 7.6 percent. The Bloomberg consensus Price/EPS forecast for the next two years is 12.84, which implies a real earnings yield (i.e. real return) of 7.8 percent over that time period. Using our more conservative estimate, a reasonable return estimate for a 50/50 muni/U.S. Equity portfolio (again, not taking into account the tax benefit for municipal bonds) over the next five to seven years is about 5.6 percent.

That’s basically an implied return of 3 percent annually over the cost of the mortgage.

One of the main investment risks inherent in maintaining debt on a balance sheet while also having sufficient assets to pay off said debt is underperformance of the investment portfolio relative to the cost of the debt. Negative five- or seven-year performance for investment portfolios is relatively uncommon. For instance, balanced portfolios fully recovered following the financial crisis in less than five years.

But the hurdle for someone that has the balance sheet strength to either pay off the debt is not a 0 percent return; the current hurdle is the real return of 0.7 percent and 1 percent for the 5/1 and 7/1 ARM mortgages, respectively. The graph below illustrates the cumulative probability of five- and seven-year real performance (annualized) for a 50/50 Barclays Aggregate/MSCI World Equity Index portfolio since 1976. Those indices were used for data availability reasons and to best approximate the performance of a globally diversified portfolio. 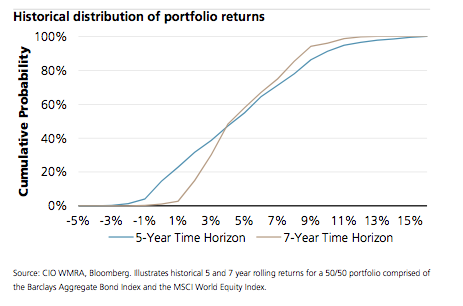 As the graph above illustrates, such an investment portfolio would have underperformed the current 1 percent real return hurdle about 23 percent of the time over a five-year period and 3 percent of the time over a seven-year period. The average real return was 7.6 percent and 4.8 percent annualized, respectively, for five and seven year time horizons.

In summary, the current pricing of certain types of mortgage debt is quite inexpensive relative to history. Accordingly, some households might find the spread between the cost of debt and estimated return on their other assets to be sufficiently high to offset the risk of holding additional debt in lieu of selling assets. Although there is some risk of underperformance, the estimated payoff to holding such debt along with a diversified investment portfolio is high enough that many investors will likely find it to be a risk worth taking. James Perkins is the senior vice president of wealth management at UBS Financial Services, Inc. in Northbrook. For 24 years, James has been working with high-net-worth families, managing their investment portfolios.

He also serves as the team’s equity portfolio manager and strategist, and sits on several private company boards. James resides in Lake Forest with his wife Jenny and their three children. He can be contacted at: 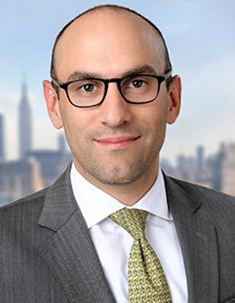 Michael Crook is an Executive Director and Head of Portfolio and Planning in Wealth Management Research, where he advises investors on global investment strategy, asset allocation, and portfolio construction. He can be contacted at: