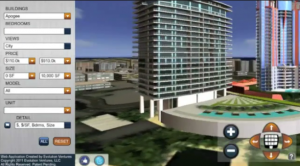 Agents looking to take their selling skills to another dimension will have one more tool in their arsenal.

The app allows agents to showcase a property to buyers through realistic, 3-D models designed for residential, retail and office real estate. The app not only enables agents the ability to show 3-D exterior shots of the property they’re selling, but also integrates videos, picture galleries, area mapping and 3-D floor plans as well, in addition to other content.

Jessica Wade Pfeffer, president of Jessica Wade Inc., the communications firm working with Evolution Ventures, explained that the group ventured into the Chicago market because of its population and existing skyline.

“Chicago is an exciting market because of its density and the large number of high-rises, which benefit most from our technology,” she said.

Pfeffer explained that Sage is usually sold to a property’s ownership or brokerage firm, and are then distributed to its agents. Licensing fees depend on the scope and customization of a project.

Once an agent’s firm has signed up for Sage, Pfeffer explained that all they have to do is perform an “on-the-fly” installation, where they’ll be sent a link in their email to install the application.

The app was created by Evolution Ventures’ own Eyal Weinstein and Jonathan Oleinick, with Weinstein handling the app’s architecture, conceptualization and design.

In terms of creating the renderings, Pfeffer explained that the process takes the team two to four weeks and that they, “base the models on basic architectural documents and photography,” provided by the firm.

While Sage may be an exclusive tool for agents, Pfeffer explained that they are working on some applications that will eventually be made available for public use.

The company already has a list of local Miami residences that utilizes the app’s technology like Marquis Residences and BrickellHouse, but has also created a strong presence in the New York area.

“We like markets that are dense and that have dramatic skylines,” explained Pfeffer in regards to expanding to other cities.