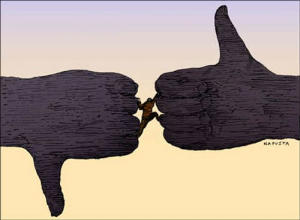 Now that the mortgage interest tax deduction is on the cutting block, supporters and critics are letting loose.

Who knew something so popular could receive such scorn?

Since mid-September, when the mortgage interest tax deduction (MID) was floated as a possible casualty of the Congressional “Super Committee” charged with lowering the federal deficit, the famous deduction has been continually in the news, our site included.

Not all that news, though, has been good, and various critics of MID have emerged as it faces its first serious opposition since 2005, when a commission for the White House came out against it. Here is a brief survey of some of the arguments for and against MID:

The biggest defenders of MID are housing advocates and prominent members of housing organizations. For instance, Lawrence Yun, the chief economist at the National Association of Realtors, told Bloomberg that not only had MID “lowered the cost of ownership,” but it had also boosted the U.S.’ homeownership rate, which he described as “the foundation for a very stable, democratic country.”

Additionally, a USA Today/Gallup Poll in April found that 62 percent of respondents opposed eliminating the tax break. That polling data, though, conflicts with polling data conducted by Bloomberg. A recent poll by the news agency found that 48 percent of respondents would give up the MID in return for lower tax rates, with 45 percent opposing such eliminations; in Dec. 2010, 51 percent opposed an elimination and only 41 percent supported it, suggesting an interesting change in public opinion the last 11 months.

The number one criticism of MID is that it only benefits upper-class homeowners.

As Dennis J. Ventry Jr., a professor of tax law at the University of California-Davis School of Law, told Bloomberg, “(MID) is the most inequitable and inefficient provision in the Internal Revenue Code.” The higher the homeowner’s income, Green said, the higher his or her deduction, and as a result, 46 percent of the deduction’s benefits to go homes with incomes of $100 thousand or more.

A report by Christian A. L. Hilber of the London School of Economics and Tracy M. Turner of Kansas State University came to similar conclusions. The economists wrote, “We find that the MID only boosts homeownership attainment of higher income households in less tightly regulated housing markets. In more restrictive places – typically larger coastal cities – an adverse effect exists.”

Indeed, the raw data that Bloomberg cites would seem to suggest that very few Americans actually benefit from MID. According to Bloomberg, only one in four Americans included mortgage interest on their taxes, while renters and homeowners without mortgages do not benefit and lower/middle class homeowners who use standard tax deductions, rather than itemized, also miss out on MID’s benefits.

So if MID works in such an unfair way, what are the solutions? The 2009 Bowles-Simpson Commission, the deficit team assembled by President Obama, recommended eliminating the benefit as a deduction and replacing it with a 12 percent tax credit on the first $500 thousand of the home’s interest.

And research definitely suggests that something should replace the deduction, rather than an all-out abolition of tax incentives for housing. Bloomberg cites the work of Richard K. Green, director of the University of Southern California Lusk Center for Real Estate, which found that households earning more than $160,000 would pay more than $2,500 in additional taxes, with high-priced real estate experiencing particular pain.

“The city of San Francisco would just get whacked,” Green said.