In 1922, an unusual woman started a real estate firm in Chicago. She began with a single salesman who was still driving a taxi when he started, but within a couple of years built one of the nation’s largest firms, selling what would be more than $400 million today and employing hundreds of agents. This entrepreneur was Edith Rockefeller McCormick, recently divorced and facing stern rebukes from her father, John D. Rockefeller. Real estate was a man’s game at the time, and The New York Herald looked forward to seeing “how well she is able to hold her own with the male real estate dealers of Chicago who have been accustomed to purely masculine competition.”

Edith put her money and her reputation up front, providing huge sums to purchase property and run the business while allowing her partners, Edwin Krenn and Edward Dato, to oversee daily management. Krenn & Dato’s reassuring slogan was “The Mark of Security” and it always bore the tagline, “Exclusive Agent for Mrs. Rockefeller McCormick Properties.”

Having worked with Daniel Burnham on development ideas for Lake Forest, Edith shared his notion of “making no small plans.” Krenn & Dato bought up large chunks of land along the new L tracks. Further north, they developed the 200-acre Highland Park Highlands. There were dozens of other projects, stretching from Waukegan to Calumet and west to LaGrange. Many, including a 16-story skyscraper at 3300 Lake Shore Dr., still exist. There were projects throughout the United States, such as the Union National Bank building in Wichita, Kansas, and the Roosevelt Hotel in Cedar Rapids, Iowa.

The firm began with a one-room ground-floor office at the corner of Michigan Avenue and Ohio Street, but soon commandeered the entire three-story building, plus an additional site on LaSalle Street. Yes, it was the beginning of a real estate boom, and having millions at your disposal may seem to be an unfair advantage. But much of Krenn & Dato’s strategy carries over to today.

Tuesday and Friday evenings found the partners on the State Street sidewalk, ushering potential salespeople into an auditorium for a free educational session. Complimentary refreshments and entertainment lured new recruits by the dozens. The Krenn & Dato Real Estate School of Salesmanship offered not only promises of large paychecks and improved self-worth but also typewritten scripts of exactly how to conduct sales calls. The fledgling sales staff learned to be dogged in presenting the sure-fire profits to be made and were given every possible tool for success. 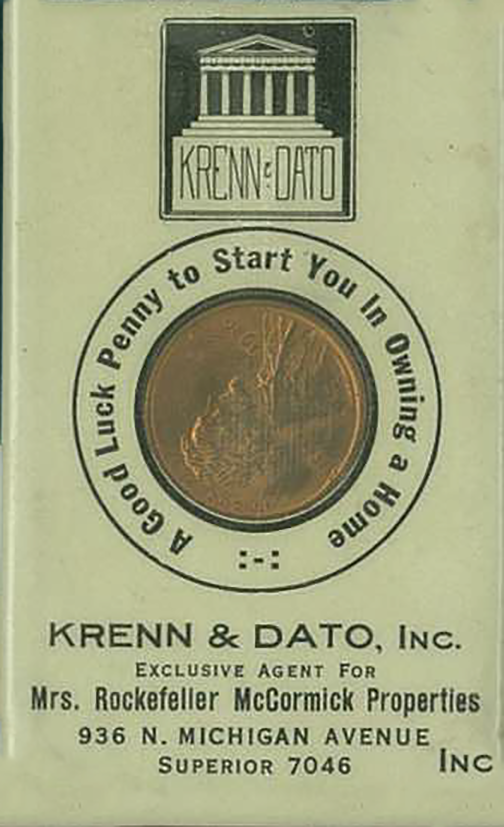 An example of the Krenn & Dato lucky penny pocket mirror, given out to help spread the brokerage’s name and start conversations with prospects

Full-page ads in daily newspapers attracted both new sales associates and buyers. One, headlined “I Represent the Firm of Krenn & Dato” in 28-point type, underscored the firm’s commitment to employing salespeople of honesty and high character. Krenn & Dato also made clear that they welcomed women into their ranks and tried to involve them in every aspect of business. At the Woman’s World’s Fairs that took place annually in the mid-1920s, the firm always had a prominently placed booth and recruited heavily. They also equipped their salespeople with unique little giveaways — such as a lucky penny pocket mirror — to help spread the Krenn & Dato name and serve as conversation starters.

The annual Krenn & Dato banquet was a fancy affair, taking place in the Drake Hotel ballroom and offering live entertainment, dancing, a multicourse meal and inspirational speakers. Just the novelty of being in the same room with Edith was a boon, and the event was often covered in the papers. Salespeople vied for the “Top-Notcher” awards presented to those with the highest sales.

Those “Top-Notchers” were featured in the Krenn & Dato monthly newsletter, which also included information on new projects, tricks of the trade, how to get involved in the firm’s baseball league and even its own comic strip. Cheekily named cartoon character “Iona Lott” provided real estate humor and helped create a workplace culture.

6. Get involved in the community

The firm’s biggest endeavor was an 1,800-acre enterprise outside of Kenosha encompassing more than 3.5 miles of lakefront property. Here, Krenn & Dato planned a utopian community featuring mansions, recreational facilities, a marina, an airport and what Edith called a National University campus — a recharging spot for educators providing summer learning opportunities for professors from across the country. Krenn & Dato got the public involved by hosting a naming contest. Amid the staggering 80,000 entries was the winner: Edithton. That lucky submitter walked away with $1,500. Goodwill and publicity went hand in hand.

Cultivating a clear vision for the future

Despite Krenn & Dato’s incredible growth and success, John D. Rockefeller was not impressed. Thoroughly traditional in his gender expectations, he warned Edith repeatedly to get out of the business. She failed to heed his warnings and pushed on, even when the real estate market began to falter in 1927. Annual profits quickly turned into severe losses and when the stock market crashed in 1929, Edith was left holding huge quantities of land.

Edithton never came to be. The business dissolved completely when Edith died of cancer in 1932. But where she may have failed to see the coming financial calamity, she clearly saw the potential for women in real estate, training hundreds of agents along the way.

Edith’s real estate philosophy was clear: “By ever keeping before us the welfare of our city and by planning and working for her betterment, we will be making a worthy contribution to American civilization.”

Andrea Friederici Ross is the author of “Edith: The Rogue Rockefeller McCormick,” in book stores this month.