Zillow recently released its Q4 Home Price Expectations Survey, which polled 100 housing experts, market strategists and economists on what they think the housing market will look like in 2018, and their expectations were less than optimistic. The study was done in collaboration with Pulsenomics, a data-centric research and consulting firm.

The experts project a 4.1 percent increasing of home prices next year as a result of a 33-month consecutive streak of low housing inventory. Despite construction picking up slightly at the end of 2017, they don’t expect inventory as a whole to change in the new year. Homebuyers are scrambling to take whatever they can get on the current market, and as a consequence, single-family construction fell majorly by the end of Q4.

“Home building has not kept pace with this surge in demand and remains well below historical norms,” said Aaron Terrazas, Zillow senior economist. “We don’t expect that these demand-supply imbalances will fundamentally shift in 2018 — demand will continue to grow and, though supply should increase somewhat, we still won’t build enough new homes to meet this demand, contributing to higher prices.”

Panelists also predict an uptick in mortgage rates in the new year; mortgages rates were dirt-cheap this year, but 36.5 percent of specialists foresee them going up in 2018. A majority of respondents also anticipate home value appreciation falling next year, despite buyers feeling pressured to buy. All in all, the five-year outlook for the housing market remains questionable for now, with an equal amount of experts remaining positive as those losing confidence.

“I don’t foresee a stronger consensus emerging until we have greater clarity concerning tax reform and the pace of the entry-level home building,” said Terry Loebs, founder of Pulsenomics. 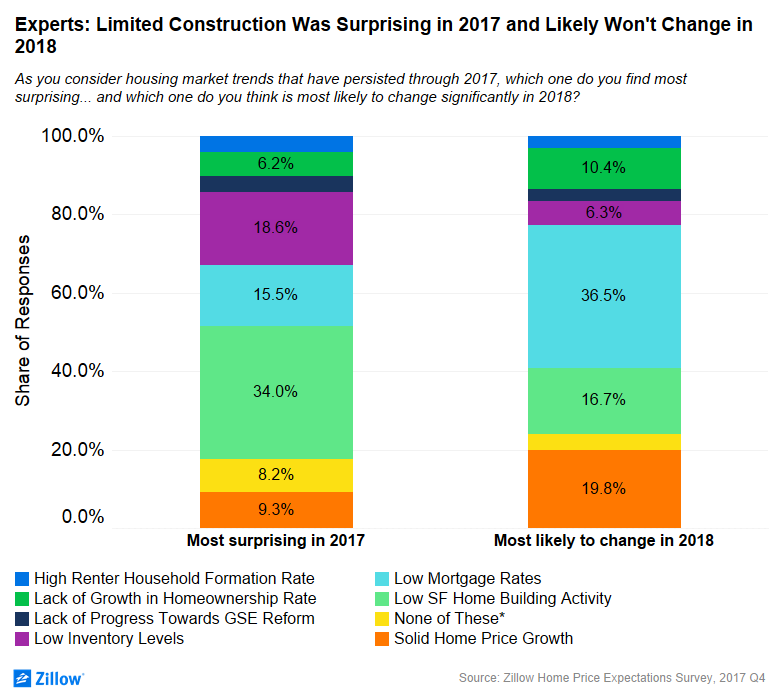