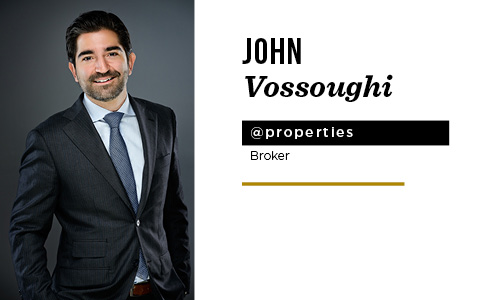 The Boss Group, headed by broker John Vossoughi and his partner Nathan Binkley, is a nine-agent team. Each agent was personally recruited and trained. This group has stood out at @properties, ranking among the firm’s leading producers in 2013, 2014 and 2015. The team has worked on projects ranging in price from $200,000 to $22 million. In 2013 alone, Vossoughi brokered 55 transactions, totaling over $20 million. In both 2014 and 2015, the group assisted in more than 100 deals, and sold just over $40 million in real estate. On average, The Boss Group listings sold in just under one month on the market.

Prior to joining @properties, Vossoughi graduated from DePaul University with a Bachelor of Arts in economics, and worked for CB Richard Ellis as a property manager. In this role, he oversaw commercial office space for four buildings consisting of more than 550,000 square feet in total. Vossoughi also supervised several construction projects and skillfully negotiated contract services and prices with a wide variety of vendors to meet the budget constraints of each property he managed. Through those negotiations, Vossoughi was able to save his investors money – a skill he promises to bring to his clients.

“I owe this all to my mom. She is the coolest. And by coolest, I mean she made me wear turtlenecks and corduroys in fourth grade, and I never looked back. Love you!”