What Your Clients Really Think of You

Public perception of real estate agents as a group has remained more or less positive over the years. Gallup polls used to analyze public opinion regarding the honesty and ethics of various professions have consistently ranked real estate agents as solidly “average” since the early 1990s, with 57 to 58 percent of respondents giving that answer every time the poll has been conducted since 1998. For the same time period, between 14 and 20 percent of participants have rated them at “high” or “very high” for honesty and ethics.

The positive remarks Kombrink reads in reviews bring to light things that he and his team don’t normally think about, such as when a client feels they’ve been responsive to their needs and patient with them throughout the process.

“We do a lot of these things by instinct, but when we see it written out by the customer, we try to pick out the common denominators,” he says. “We try to make those part of our value set in how we deal with our clients.”

Despite these positives, agents sometimes have to win over prospective clients who may be wary of the profession. They may have been burned in the past by a bad agent, or they’ve heard a horror story from someone who had a bad experience buying or selling a home. Despite their need to sell or their desire to buy, they might be extremely reluctant to commit to working with any agent. Testimonials and reviews can help put them at ease, as can the agent’s personal assurances. Best, Alberts and Kombrink all work to assure their clients of their honesty and integrity, while letting them know that they will work as advocates for the best interests of the buyer or seller.

By taking control of the situation and outlining a strategy for completing a transaction, agents can reassure clients that they will work to get the best deal possible. It helps to remain open to the client’s needs and ready to deal with any problems that might arise.

Kombrink recently had a client who came to him on the strength of a recommendation to enlist him in selling their house. Within two weeks of listing the property, he had received multiple offers and lined up a buyer. Unfortunately, the house developed a problem with water coming into the basement just before the signing, and the prospective buyers backed out.

The seller initially panicked, but Kombrink was able to calm him down by reminding them that they had received multiple offers on the house and that it would sell if he relisted it. In the meantime, he arranged for the water problem to be fixed so that his clients wouldn’t have to face it. He quickly found another buyer and sold the home.

“This guy had a million questions,” Kombrink says. “I helped him get the right people in there to take care of the issues and then handled the home inspection. That’s our goal when working with a client: we have the team and the staff to navigate you through your transaction. He was very grateful for that, and that we were the most responsive team he had ever worked with; he had already given my name to two other people on his block who are planning to sell next year.” 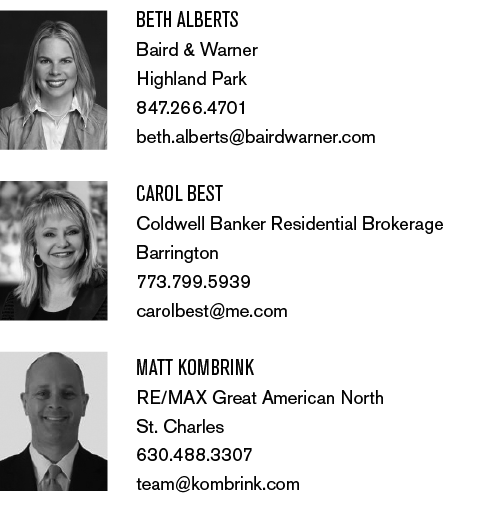