5 Ways to Stay Alert at Work – WITHOUT Caffeine

Coffee is the go-to resource for staying alert at work, but we have five more…natural alternatives to consider. 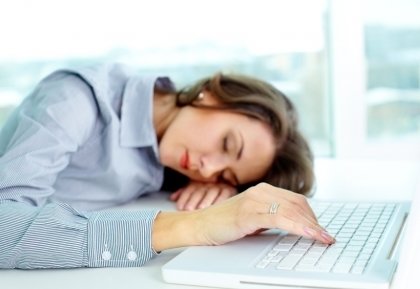 Coffee is legendary in the annals of business; indeed, that ol’ cup of joe is a required part of the day for many a professional, and real estate is no exception.

Yet, great as it may be in boosting energy, coffee has numerous side effects. It raises the heart rate; it increase blood pressure; it inflates stress; and worst of all, caffeine not only makes it harder to sleep at night, but if you’re in a groggy mood, it exacerbates those feelings, making your concentration even worse.

So what is a flailing agent to do? Here are five natural, none-caffeinated ways to stay alert during work hours:

1. Keep the Lights on – Working in brightly-lit areas boosts alertness and reduces sleepiness, with LED lighting being more affective than fluorescent lightning; according to studies, LED lights can improve memory and inspire faster response times.

2. Au Naturel – Don’t count out natural lighting, though, which also increases productivity and helps you sleep better at night – and better sleep, of course, only boosts your productivity further. Writing for Quartz, Laura Davidson referenced a study of call center employees that found workers with window views not only processed calls up to 12 percent faster, but that they also performed 10 to 25 percent better on mental function tests and experienced less fatigue.

3. Stay in Rhythm – Peppy music can also be a great way to stay alert. A 2013 study, for instance, found that participants responded to test questions more accurately after listening to the first movement of Vivaldi’s “The Four Seasons.” Take note, though – dour music can have the opposite effect; Vivaldi’s “Autumn” movement decreased mental processes.

4. Eatin’ Right – A protein-rich snack can also be a great way to boost your alertness. For one, during the digestive process, the body releases the tyrosine amino acid, which improves mental function; and two, foods rich in antioxidants and borons – such as walnuts, apples, peanut butter, grapes and orange juice – have been found to improve memory and brain activity.

5. Sleep Well – Of course, the most compelling solution to any alertness deficiency is rest; for instance, a recent study found that insomnia costs the U.S. $63 billion a year in lost productivity. Along with getting the necessary rest each night, you can also consider daily naps, or even quiet, 30-minute stretches of alone time, which improve alertness and short-term memory. And businesses are taking advantage of that – Google, for one, has EnergyPod nap chairs in its offices, and both the Huffington Post and Procter & Gamble are following suit.