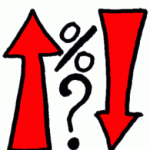 After a brief sabbatical, the 30-year FRM is back in familiar territory, falling below 4 percent for the second time in as many months.

Motivated by the Federal Reserve’s “Operation Twist,” which involves the Fed buying billions of dollars of mortgage-backed securities to increase the money supply and spur investment, the 30-year FRM had fallen to a historical 3.94 percent in October, the lowest ever on file.

Positive news on jobs from the Bureau of Labor Statistics immediately pushed the rate back above 4 percent, where it had stayed until last week’s release of data from Freddie Mac. The decline, though, was small at just 0.1 percent.

Frank Nothaft, the vice president and chief economist of Freddie Mac, said the relatively small decline was because of conflicting economic data.

“Fixed mortgage rates were little changed this week amid a mix of economic data reports,” Nothaft said. “The economy added 80,000 net jobs in October, below the market consensus forecast, but employment gains over the prior two months were revised up by 102,000 and the unemployment rate fell to 9.0 percent, the lowest in six months. Factory orders improved in September, yet the expansion in the service industry slowed in October.”

Also complicating matters is the European debt crisis. With Greece and now Italy on the brink of default, speculations abound on how Europe’s financial unrest will affect not only U.S. interest rates, but the very state of banking and lending.