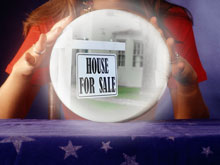 In anticipation of Tuesday's Case-Shiller report, analysts and economists alike are dragging out their crystal balls.

Predictions from analysts and fellow indexes alike point to a positive showing on Tuesday from the Case-Shiller, the influential report from Standard & Poor’s that charts housing prices, though long-term analysis remains complicated.

MacroMarkets, a financial tech company based in New Jersey, surveyed 111 economists and analysts on home prices in 2011, finding that forecasts on prices have improved considerably from June.

According to the survey, experts predicted a 3.52 percent decline in 2011 housing prices back in June, but the most recent predictions have prices falling by just 2.53 percent.

In addition, Calculated Risk compiled several competing home price indexes that all foresaw month-t0-month gains in home prices. CoreLogic, which published one such index, reported 0.8 percent gains in prices, as did the index from the Federal Housing Finance Agency.

Data was more obscure and less positive, though, on the long-term. As Calculated Risk summarized, “The consensus is that prices increased in July, but that prices will start falling again soon.” So, the indian summer for housing, which produced such strong sales in August, may be coming to an end.

MacroMarket’s survey was similarly cloudy, with analysts offering wildly contradictory estimates for the next three years. For instance, one analyst predicted a 5.7 percent decline in prices by 2015, while another predicted a 19.2 percent increase.

We’ll know with greater certainty on Tuesday morning, when the Case-Shiller is unleashed.