The forecast is in, thanks to the Zillow® November Market Report — and it’s looking to be an unseasonably warm winter for real estate. As inventory continues shrinking, competition on the market is fierce. This has led to increasing home values, even as we enter the typically slow months of winter.

The estimated US. home value is now $316,368: 19.3% higher than they were one year ago: a record high for any annual growth during the last century. And the core reason is clear: inventory. More specifically, a lack of it. During November, nationally, the number of for-sale listings was down 6.1% from October and down 17.5% from November 2020 — when inventory was already low. There are now 37.8% fewer homes on the U.S. market now than in the pre-pandemic era of November 2019. The drop is quite dramatic when you consider the full, two-year period of decline. And with inventory set to continue dwindling, home values will likely swell even further. 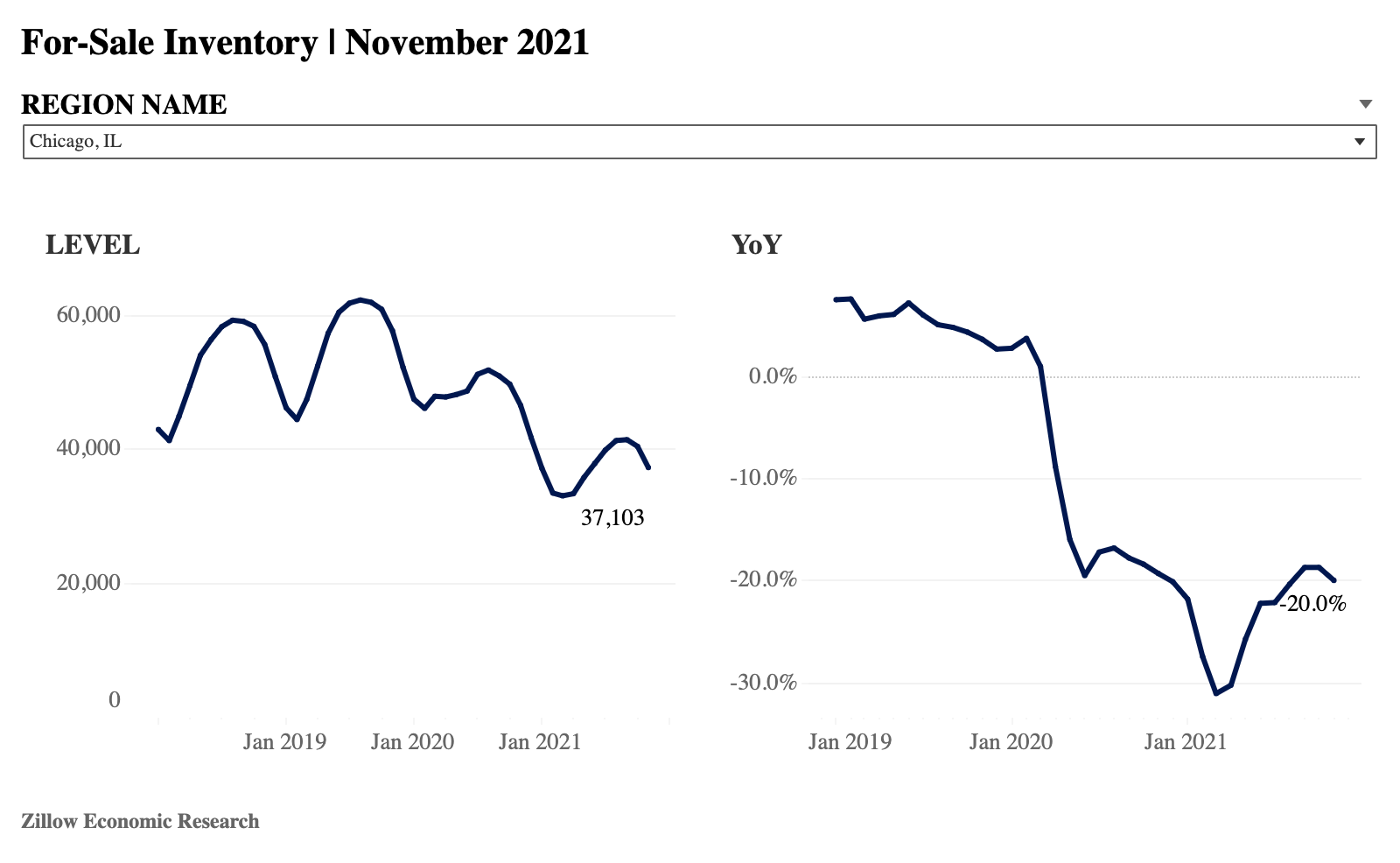 “Home buyers angling for a bargain this winter are finding the shelves nearly bare, as inventory has shrunk even faster than in a typical November,” Zillow senior economist Jeff Tucker said of the phenomenon. “Buyers will find some silver linings to this cloudy winter market, like fewer bidding wars and the typical home lingering longer on the market before the seller accepts an offer. But that’s small comfort to buyers after a year in which prices have risen by almost 20%.”

Nationally, though, the rate of monthly growth slowed. On average, the Zillow Home Value Index rose just 1.2% month over month. However, the ZHVI picked up in 30 of the country’s 50 largest metro areas. Those areas which saw the fastest monthly growth were Nashville (2.6%), Orlando (2.4%), Atlanta (2.3%), Jacksonville (2.3%) and Tampa (2.1%). In the Chicago metro area, the month-over-month change was .9%. 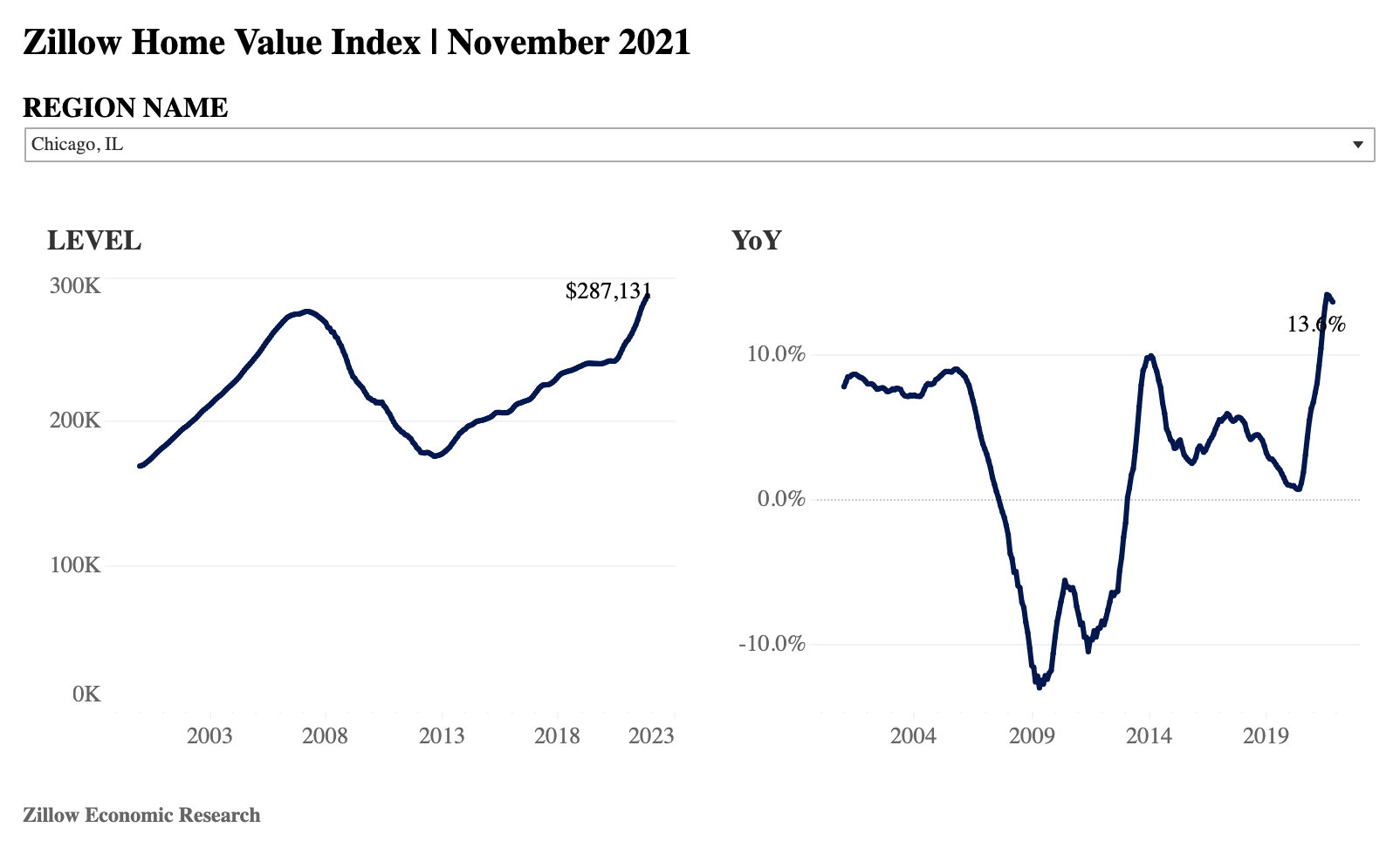 Although home values likely cannot realistically continue growing at such a fast pace, the slowdown likely won’t happen soon. When many homeowners exited forbearance programs during 2021, experts expected a rush of homes on the market. However, that was not the case. Concluding that the forbearance programs were effective in helping Americans retain homeownership, that leaves little inventory left for increasingly frenzied homebuyers.

In the new market report, Zillow predicts home values to rise another 14.3% over the next year. And while that number does mark a significant reduction from the currently high pace, it also would make for the highest annual pre-June growth, according to Zillow records. Overall, 6.5 million homes are expected to be sold next year: up from 370,000 this year, which itself was up 8.6% from 2020.

It’s tough break for prospective buyers. But for those still be considering rental options, the Zillow market report does offer some potentially positive news. Though rents themselves have inflated nearly on-par with home prices — 15.2% year-over-year in November — the rate of increase is slowing month to month. In a pattern more familiar for this time of year, monthly rent growth fell 0.9% during November. This slight decline marks the first month that rents have grown less than 1% since March 2021.

In general, it’s a seller’s market according to the Zillow® November Market Report. Though it’s key to remember that with elevated inflation, comes potentially higher mortgage rates and other policy factors. The demand for housing demand could always waver during these uncertain times.