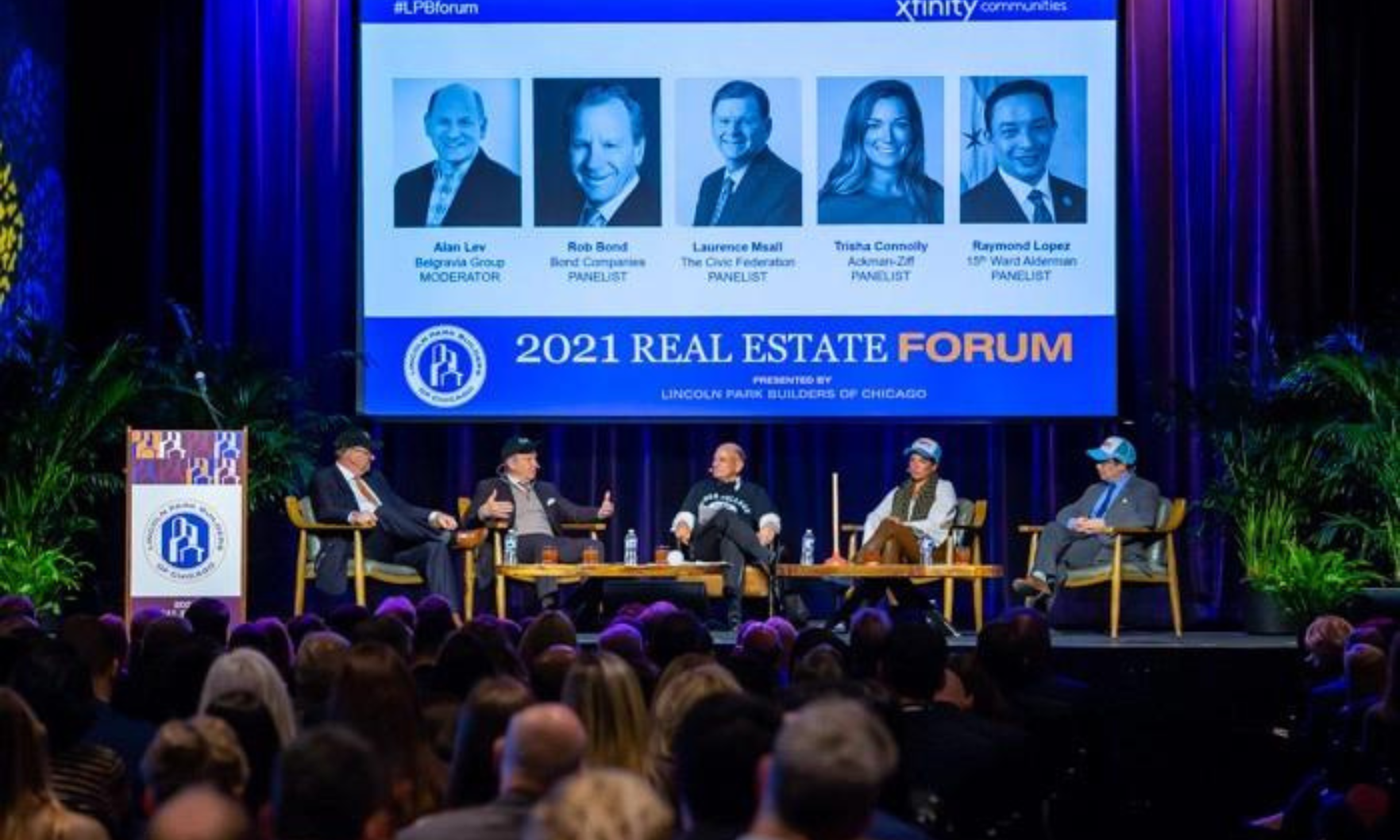 It was a night of straight talk on crime, COVID, taxes and more at the 32nd annual Real Estate Forum held by the Lincoln Park Builders.

The panel of real estate experts — Alan Lev, chairman of Belgravia Group; 15th Ward Chicago Ald. Raymond Lopez; Rob Bond, co-founder and president of Bond Cos.; Trisha Connolly, managing director of Ackman-Ziff Real Estate Group LLC; and Laurence Msall, president of the Civic Federation — held the roundtable discussion on Nov. 18 at Theater on the Lake. It was the organization’s first in-person forum since the onset of COVID-19, and hundreds of real estate professionals in attendance were required to show proof of vaccination at the door.

The forum, titled “Reversing the Flow: Overcoming Chicago’s Challenges,” aimed to address the struggles real estate professionals have faced over the last few years, while acknowledging the positives.

Bond, whose real estate development and investment firm has business around the country, said he sees some communities taking the pandemic threat more seriously than others. He said that as more people get vaccinated, they will begin to return to the office. “That will impact in a positive way community building, neighborhoods, restaurants and everything else,” he said.

Bond’s company works largely in multi-unit buildings, and he said their portfolio of business is showing that more people are returning to apartment living. “But they have not returned to the office yet,” he noted, adding that people have largely returned to Chicago, and that’s been a big boon for the city.

Crime was a hot topic for panelists, and Lopez said the city and its residents should not accept the rise in violent crime. “It’s a mindset that everything that is going on now cannot become normal,” he said. “Because when we start accepting carjacking as normal … you’re allowing them that are committed to criminality to move the goalpost away from what should be our values in this city.”

Lev, who served as moderator of the panel, questioned panelists on the topic of taxes, explaining that the tax bill on his Chicago home is about 2% of the value, while homes in a place like Phoenix have a tax rate of about half a percent of their value.
Msall said that Chicago is not the only place in the country that has high taxes and noted that the Illinois has more units of government than any other state in the country. “That’s not what you want to be No. 1 in, so we need to be more efficient and more effective,” he said. “It’s hard to convince people that it’s expensive to have 6,978 units of local government in Illinois. No other state has even half that amount.”

Msall added that Chicago is not the only city with increasing crime statistics. “There are other cities going through the very same thing,” he said. He added that there needs to be a recognition that there were problems with the Chicago Police Department before the pandemic hit. He reminded the audience that the city of Chicago has had to borrow tens of millions of dollars to settle lawsuits against the police and other city officials.