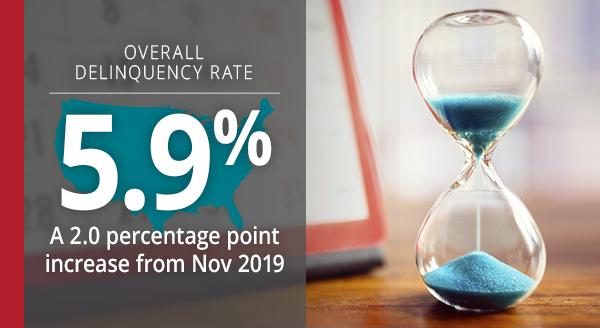 Mortgage delinquencies fell nationally to pre-pandemic levels in November and serious delinquencies dropped, according to the latest Loan Performance Insights report from CoreLogic. Meanwhile, Chicago and other cities continue to see higher delinquency numbers than in 2019.

“The consistent decline in serious delinquency since August is a sign of growing financial stability for families,” said Frank Martell, president and CEO of CoreLogic. “In addition to ensuring that homeowners stay in their homes, the decline in delinquency means fewer distressed sales, which is both a positive for individual households and the overall housing market.”

Nationally, 5.9% of all mortgages were at least 30 days delinquent in November. That figure represents a 2% year-over-year increase from November 2019, when the overall delinquency rate was 3.9 %. The delinquency rate has fallen since spiking in April 2020.

In the Chicago-Naperville-Elgin IL-IN-WI metropolitan area, 6.6% of all mortgages were at least 30 days delinquent, up from 4.3% in November 2019. The serious delinquency rate was 4.6%, a year-over-year increase from 1.6%, while the foreclosure rate was 0.4%, down from 0.6% the previous November.

“Urban areas hit hard by the pandemic recession or by a natural disaster experienced the largest spike in delinquency over the last year,” said Dr. Frank Nothaft, chief economist at CoreLogic. “Forbearance and loan modification helped struggling families rebuild their financial house in hard-hit places. While vaccination will mitigate the pandemic, the best cure for delinquency is income restoration through job creation.”