Which Chicago neighborhoods will be hit hardest by COVID-19?

It’s been said that the COVID-19 virus doesn’t discriminate when it comes to infection; we’re all at risk. However, certain neighborhoods may be hit harder both with health issues and economic fallout stemming from the shutdown instituted to curb the coronavirus pandemic.

A new study from the Institute for Housing Studies at DePaul University examined the trends and geographic patterns of workers who were more at-risk during the first wave of COVID-19-related mass layoffs. 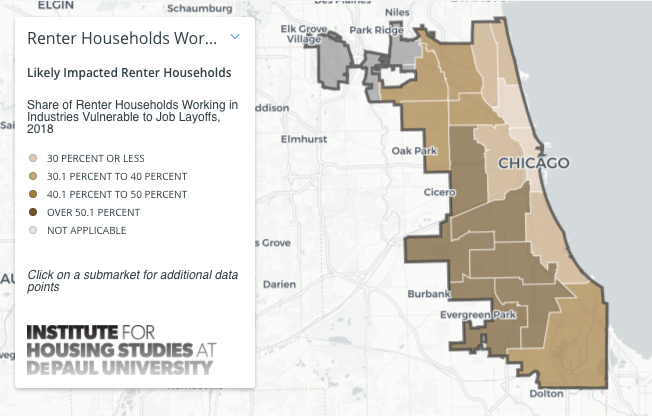 The researchers found Chicago’s South and West sides will be significantly more impacted than other spots in the city. They identified six geographic areas where the share of renter households vulnerable to job layoffs as of 2018 was higher than half:

The percentage is even starker when compared to the area with the fewest at-risk workers. For those living in the Loop and surrounding neighborhoods, only 23.4% of households were considered to be at risk.

There are multiple reasons why certain geographic areas might be hit harder than others. Older people and immunocompromised adults are more at risk of complications from the virus than the general population. Also, those working service sector jobs face a double-edged sword of health and economic pains: Some are considered essential workers and are more or less compelled to keep heading to their job sites even if they have considerable health concerns, but others are more likely to be laid off in the interim.

In a city as segregated as Chicago, there are certainly racial and ethnic challenges as well. The fact that black and Hispanic people have been hit harder by the pandemic has not been lost on Mayor Lori Lightfoot’s office, which announced a rapid response team near the end of April “to address the disproportionate impact of the coronavirus pandemic on African-American communities,” concentrating first on Austin, Auburn Gresham and South Shore.