When it comes to business in the age of COVID-19, buyer’s agents may be having a slower time of it than listing agents if a new survey is any indication. HomeLight, a software company that provides matching services to homebuyers, sellers and real estate agents, asked brokers what they’re seeing in terms of client reactions to the coronavirus pandemic, fluctuations in home prices and the threat of a recession. 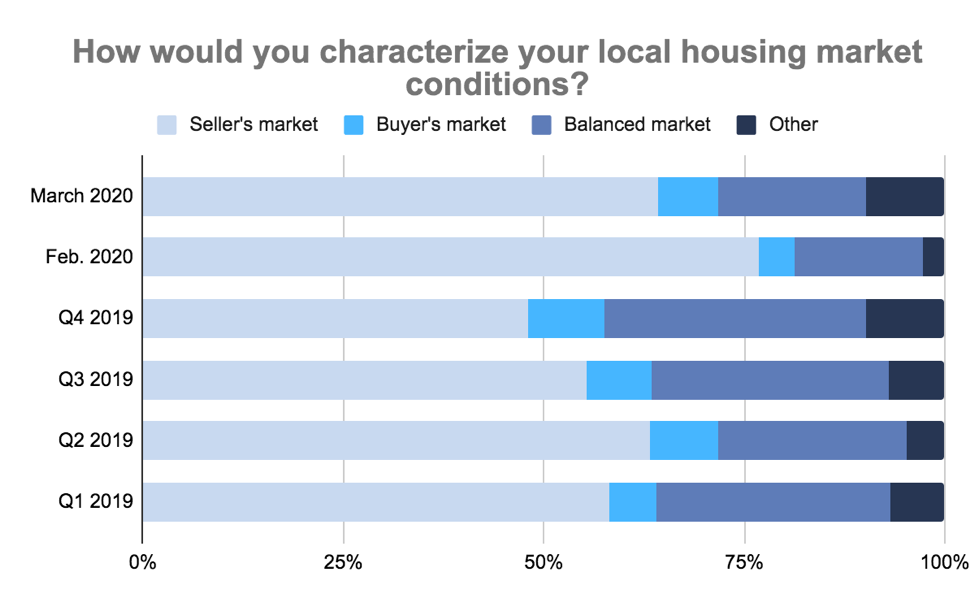 The company polled around 600 agents across the nation in February — before the World Health Organization declared the new coronavirus outbreak to be a global pandemic — and then again in mid-March to gauge the change in sentiment. Less than half of all agents reported declines in client interest; 41% of respondents observed a decline in seller activity since the escalation of the coronavirus and 45% noted the same in buyers.

Only 22 percent of agents said they’ve seen sellers take their home off the market. While that means a majority of sellers are choosing to carry on with their plans, sales tactics have needed to change for many. Agents reported that, among the sellers who are keeping their homes on the market, 66% are taking measures to keep their home from being exposed to the virus. Thirty-two percent are halting open houses in favor of a showings-only policy, and 21% are asking buyers to wash their hands or use hand sanitizer. Nearly 20% of agents said they’ve seen an increase in the demand for virtual showings amid the coronavirus outbreak. Of course, there are some areas where local officials have asked that open houses be canceled or postponed, so there is likely a fair amount of regional differentiation in this national study.

In contrast, buyers appear to be more likely to step away from the market at this point. Fifty-two percent of agents told HomeLight they’ve seen buyers put their home searches on hold. However, this may not have been at their brokers’ advice; the share of agents who told HomeLight that local conditions constitute a seller’s market dropped 13 percentage points over the last month, from 77% in February to 64% in March.

In February, only 5% of respondents predicted that this spring would be slower than last year. In this new poll, that number jumped to 44%. This quick swing in market perception extended to prices as well. In February, 65% of agents expected home values to grow; that number declined to 25% in March. Price decreases may in part slow down because there’s less demand from buyers. Back in February, 62% of respondents said bidding wars were on the rise. In March, that share dropped to 40%.

Though buyers appear to be dropping out of the market at a higher frequency, that does not seem to be taking the pressure off of the supply problem. In February, 73% of agents reported inventory was lower than expected; that number dipped only slightly in March to 70%.

Is a recession around the corner? Back in November, only 12% of agents told HomeLight they saw one on the horizon in 2020. In March, that number more than tripled, hitting 40%.

HomeLight COO Sumant Sridharan echoed what economists have been saying about the recession that may have already begun in response to the pandemic. “One silver lining is that the strength of the existing housing market isn’t an illusion propped up by overbuilding, pricing bubbles, and unregulated lending policies,” Sridharan said in a press release announcing the findings. “We’re better positioned to weather a storm than we were 12 years ago as far as housing is concerned.”