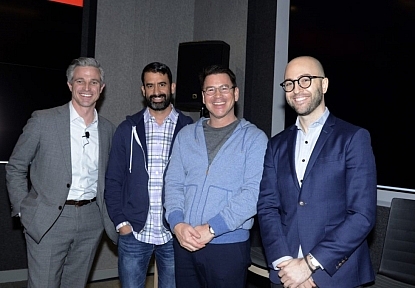 Will technology one day replace the role of the real estate agent? In an era of rapidly evolving customer relationship management software, iBuyers and the constant specter of brokerage mergers and acquisitions—always, it seems, with tech bandied about as part of the strategy behind them—it’s a fair question to be asking.

Panelists who spoke on a panel about the future of real estate technology at Chicago Agent magazine’s Accelerate Summit on March 5 wrestled with the changing role of the real estate professional as technology evolves. A consistent theme in what was at times a rollicking discussion was whether the role of the agent was in peril, destined to be subsumed in one way or another by ever more sophisticated digital tools.

But there was no consensus that the industry as we’ve known it is doomed. When asked point-blank by moderator Kevin Van Eck of @properties whether technology will eliminate the role of the broker, Leo Pareja, CEO of Virginia-based data-mining platform Remine, may have said it best: “I’ve raised $48 million betting that it won’t.”

Pareja, a former agent whose technology platform is licensed to individual multiple listing services which provide it for use to agents in their coverage areas, emphasized the role of relationships in real estate and said they are unlikely to be replaced by any app or tool.

Panelist Thad Wong voiced the view that emerging iBuyer technology, which allows offers to be made on property without human representation, might take up 25 percent of the total market within as little as seven to eight years. But the @properties co-founder took an it’s-just-business tack in evaluating such changes: “[The increasing prevalence of iBuyers] doesn’t replace the broker, but what it does is it forces the broker to create a better value proposition, which gives a reason for the consumer to hire them.”

Wong offered a dose of stiff medicine that served to frame the discussion around technology in a different way than his fellow panelists. “Technology is not here to preserve our existence. It’s here to enhance the experience and the pricing of the consumer,” he said.

Ultimately, Wong said, some agents and brokerages will be able to weather the changes that are coming to the field, and some will not.

Nicholas Palance, who founded subscription-based real estate business management platform Stacks, which operates out of New York City, pointed to the hard work and systematic efforts of the minority of agents who approach their jobs with the most rigor and seriousness. “There’s a certain aspect to our job that is just always going to be inherently analogue,” Palance said, noting that latest gadget or app is not the deciding factor in success. When you realize that “five percent of the agents make 95 percent of the income at all these firms, it’s the cliché of, ‘Oh, well, they treat their business like a business, and most agents don’t.’ Well, it’s actually the truth.”

Palance added that the business of tech companies is to sell technology, and that real estate professionals should keep that in mind when evaluating offerings: “There’s a lot of people who will try to sell you on the psychology of greed and fear that’s sort of running our market around now. It helps them sell you on the idea that this shiny new object is gonna make you richer, faster and better without the hard work.”