Where is Chicagoland’s biggest growth in high-earning households? 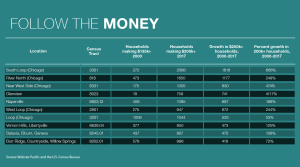 One of the things that drives real estate is the search for the next booming neighborhood. While there’s no easy way to know for sure where the next popular spot will be, sometimes the answer lies hidden in plain sight — in a spreadsheet.

With the help of data supplied by consulting firm Webster Pacific, we crunched the numbers on over 3,000 census tracts in Illinois and found the 10 in the Chicagoland area that saw the largest numerical increase in households with incomes of $200,000 or more (in 2017 dollars) between the year 2000 and 2017 — which is the most recent year with available data from the U.S. Census Bureau’s American Community Survey.

If you build it, they will come

As it happens, the tracts are evenly split at five apiece between the city and suburbs. One thing that nearly all of the census tracts that made the cut have in common is significant amounts of new development in the past two decades and a corresponding spike in total population. This was true in the city as well as the suburbs. In the South Loop, for example, Census Tract 3301 (No. 1 on our list for gains in households making $200,000 or more) saw a 279 percent jump in its number of total households from 2000 to 2017. More than 40 miles away, Census Tract 8545.01 — which covers parts of Geneva, most of Elburn and rural areas between the two towns — logged a 143 percent gain in household count from 2000 to 2017. That Kane County census tract ranks 9th on our list of tracts that saw the most growth in high-earning households.

North of the city, in Glenview, Census Tract 8023 lies mostly on land that was part of a navy base until the mid-1990s, when the base closed. Large-scale residential and commercial development followed after a 1998 master plan led by the village of Glenview. The Glen, an entire series of neighborhoods, now covers some 1,121 acres — much of it included in Tract 8023. With the construction of The Glen, the tract’s household count notched more than a 4,000 percent increase from 2000 to 2017, but what might be even more significant to close observers of trends in the real estate of the area was how many of its new households proved to be affluent. Out of 1,620 new households formed from 2000 to 2017 in the tract, nearly half — 759 — were in the $200,000-and-up income bracket.

Have a look at the full list below to get a more complete sense of which Chicagoland census tracts have become money magnets.

Evi Arthur contributed to the reporting of this story.