What baby boomers want in their next home In a recent poll about what baby boomers want as they move into retirement, many said they are looking for homes near their grandchildren and homes with a multi-car garage and storage.

According to the Del Webb Baby Boomer Survey, sponsored by homebuilder PulteGroup, Inc., 38 percent of baby boomers plan on buying a new home within the next three years, and 11 percent are looking for one within a year.

Their main reasons for buying a new home are retirement (39 percent), the need to downsize (33 percent) and wanting to live in a better location (30 percent). In fact, baby boomers are now expecting to retire around age 63, which is down from the expected age of 65 in the 2013 survey.

The top five features baby boomers want in their next home are a multi-car garage with storage, open deck or patio, an open floor plan, an eat-in kitchen and a small, private yard. 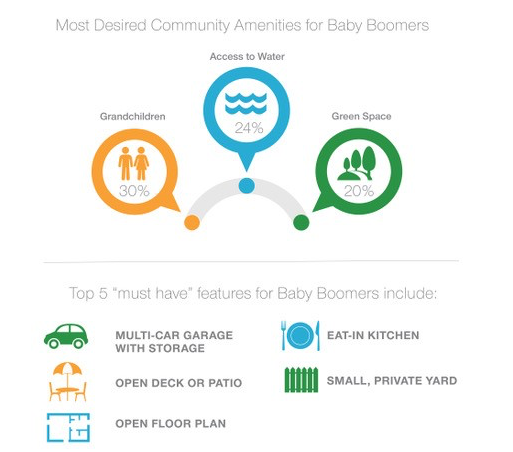 For those who want to move to another state, Florida is the preferred destination, with 28 percent of those surveyed wanting to move to the Sunshine State. The other top picks are Arizona (11 percent), the Carolinas (9 percent), Texas (7 percent) and California (5 percent). In deciding where to move, 82 percent of survey respondents said that an area’s cost of living is a major influence, and 74 percent will take into consideration access to preferred healthcare programs.

“Retirement marks a new phase in a baby boomer’s life, and it only seems natural to relocate or move to a new home when transitioning away from their primary career, or from the day-to-day rearing of school-aged children,” says Jay Mason, vice president of market intelligence for PulteGroup. “Whether they are selling the homes where they raised their children and heading to sunnier pastures, or staying near their hometown, it’s not surprising that the 55-plus buyer wants a variety of options and choices in their homes.”