Homes are selling faster than ever as inventory tightens

Demand for homes continues to grow as houses are selling faster than every before, according to Redfin. Typical homes went under contract in 40 days in April, 10 days faster than the previous year, making April Redfin’s fastest month on record since it began tracking data in 2010.

Approximately 22 percent of homes sold in April were under contract within two weeks and nearly 25 percent sold above their list price, which is the highest percentage that Redfin has recorded.

“The market tends to accelerate through June so I wouldn’t be surprised if new records for speed and competition are reached in May and June given what we are seeing now,” said Nela Richardson, Redfin chief economist.

Home prices are also continuing to grow as the median sale price reached $280,000 in April, a 6.2 percent increase. However, home sales only grew 1.2 percent over the previous year because of a lack of inventory. The number of homes for sale fell 13.3 percent, the 19th straight month of annual declines and the steepest decline in four years. 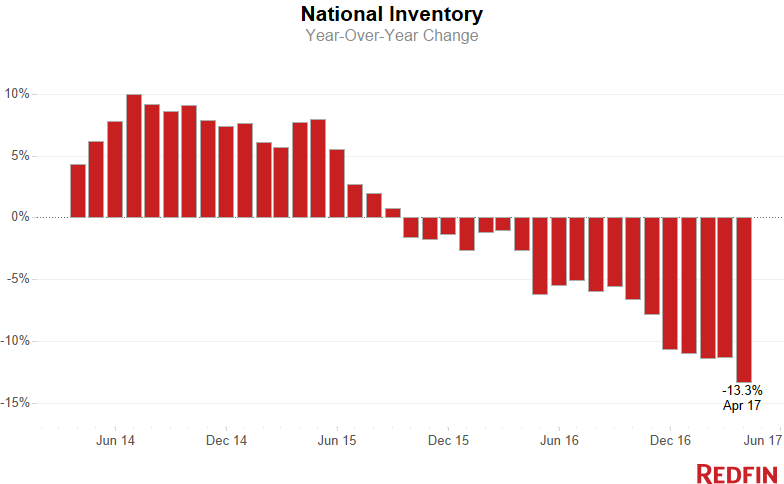 The lack of inventory is concerning to some realtors across the country as it is limiting sales. The lack of new construction is constraining inventory with homebuilders putting up 18 percent fewer homes than the 25-year average. Most cities are seeing booms in office buildings, rather than housing, and if housing is built it is mainly apartment buildings, according to Glenn Kelman, CEO of Redfin.

“The inventory is reaching historic lows. It’s never declined faster than it did last month. It’s freaking us out — it’s affecting our business; it’s limiting our sales,” Kelman said to CNBC. “We’re going to be fine in terms of market share, but I think the overall industry for the first time is seeing sales volume really limited by the inventory crunch.”