Chicago has the most loyal residents in the country More than nine out of 10 Chicago residents say they want to stay in the area for the foreseeable future, making its residents the most loyal of any city in the country, according to a recent report by Redfin.com.

Redfin looked at the migration patterns of homebuyers as based on searches for homes from people living outside that market. Nationally, about 80 percent of people searched for homes exclusively in their market. In Chicago, 92.5 percent of Redfin users searched for homes only in that area, according to the study. That puts Chicago more than one percentage point above second-place Boston, where 91.6 percent of residents are looking to stay.

Chicago’s status as having some of the most dedicated residents largely bucks the trend across the country of residents leaving expensive markets for cheaper, greener pastures. The three metros with the biggest outflow of residents are San Francisco, New York and Los Angeles – some of the most expensive markets in the country. Chicago came in fifth for net outflow, defined by Redfin as the number of local users searching for a home in a different metro minus the number of users from another metro searching for a home in the subject metro, according to Redfin.

“We found that some of the most expensive metros had the largest net outflow,” the Redfin study says.

Where residents look to leave

Chicago may have placed fifth on the list of outflow of residents, but that still represents only a fraction of overall residents. The market had 2,687 more people looking to live elsewhere than stay local. That number seems high—but it’s only 7.5 percent of market residents looking to reside elsewhere.

Check out the other areas that Chicago residents are eyeing, according to Redfin.com: 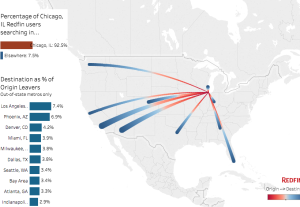