As Cooper sees it, the government’s dealings with Wall Street is a clear statement: we support renting. Former NAREB President Branch sees similar attitudes in Chicago.

“The focus for Chicago’s City Council, as well as the state, has turned from one on homeownership to one on the rental base. Much of that has to do with the instability in several neighborhoods, as well as a lack of affordable housing options,” he says. “We need to change that conversation.”

From 2007 to 2014, the number of 25-to-34-year-old renters in Cook County jumped by more than 75,000, or 40 percent, according to The Chicago Tribune. During that time, average rents have increased 3.9 percent per year in the city, while in the near suburbs, rents are expected to rise 3 to 5 percent in the next year, according to Appraisal Research Vice President Ron DeVries, quoted in Crain’s Chicago Business.

“(A) Census report … found that homeownership does have a significant impact of lowering the mover rate. That is, among people of the same age, same income and same marital status, a person was significantly more likely in a given year if he or she was a renter rather than a homeowner. Homeowners bring stability to neighborhoods.”

AR went on to report that homeownership also “strengthens social ties with neighborhoods,” and makes a “significant positive impact on educational achievement.”

Cooper says that when governments talk and take actions that say that “it’s better to rent than to own,” it perpetuates a cycle of instability that keeps communities – especially low-income communities – from developing. But he adds that while government at the local, state and federal levels need to lead this conversation, they are not the only ones who need to take part. 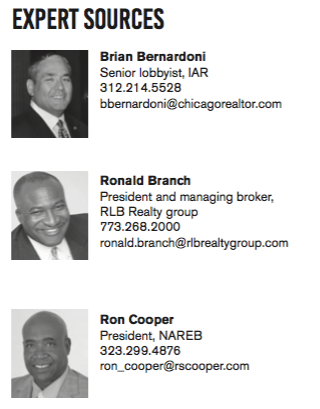