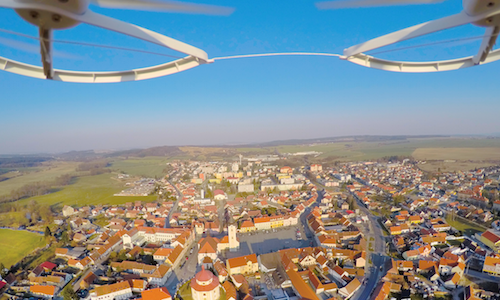 As of late May 2015, the Federal Aviation Administration had granted 434 section 333 exemption petitions, which allow for the commercial use of unmanned aerial vehicles, or drones, and among them, 64 were for explicit real estate purposes generally described as “aerial photography and video.”

Jeff Galindo, principal of Real Estate Strategies and a Realtor with Simply Vegas Real Estate, is one of, if not the, first real estate professionals in Nevada to be granted the exemption, which, he said, is giving him quite the advantage.

“The opportunities that will come out of this, I think, are more numerous than I can even yet imagine.”

By 2018, it’s estimated that upwards of 7,000 businesses will have obtained drone permits from the FAA, but in the meantime, exemptions offer a more direct pathway to drone usage for professionals already familiar with the intricacies of flight. Prior to even applying for his exemption, Galindo said he was already an experienced and licensed pilot.

Applying for the section 333, which would exempt professionals from needing certain certifications, such as those for airworthiness and noise, is as easy as visiting the FAA’s website. However, being granted an exemption is a different story. Not only is it about agents proving their proficiency as a pilot, but also just to be considered is a matter of waiting in an increasingly long line.

“I got in early,” Galindo said of his application process. “I made my submission very early in January of this year. In fact, I think I was number 67 on the list.”

He said that throughout the process, as he checked in with the FAA for updates, he became aware of just how many applications were being filed.

“(The FAA) said they were getting so many exemption requests that they would be taking well into 2017.”

Still, despite the evident importance of punctuality, Galindo doesn’t believe drone use is something agents should rush into.

“I have a passion for aviation, and have for quite a long time,” he said. “If an agent is interested in using a drone for their own commercial purposes, I would encourage them to first get some practice time with one, just to get the hang of it and see if it’s something they want to pursue professionally or commercially.”

Too Many Applications to Name

While the concrete ruling defining the legality of commercial drone use was fairly recent (as early as May 2014, drones were becoming a popular marketing tool for non-pilot agents) the penalties are, nonetheless, real and severe. Agents caught using drones without approval from the FAA face a $10,000 fine, which makes an exemption an exceedingly valuable commodity.
For Galindo, the applications of drones, which he admits not even he’s fully aware of, have already begun manifesting themselves in profitable ways he didn’t originally anticipate.
“I’ve been approached by several companies about helping them with residential and commercial inspections,” he confirmed.

Among the exemption permits recently granted by the FAA, several companies showed a penchant for innovation in their original disclosures. For instance, Skycapture, a multimedia company based in Houston, said it will be using drones to “evaluate” properties and produce “topography reports,” while Dennis Fisher, president of Ohio-based Rapid Mortgage Company, said he will be leveraging the technology to “enhance community awareness.”

Exemption applications are currently being accepted, but as Galindo alluded to, congestion could become a very real problem in the near future, as the FAA is already creating a backlog. Agents with the appropriate experience and vision for how they may incorporate UAVs into their business should apply for an exemption as soon as possible. For everyone else, 2017 isn’t too far away.