The term “bubble” gets thrown around often nowadays, but the data does not support such statements.

The great housing bubble of 2001 to 2008 was a mammoth economic event, one that pulled the housing market through a verifiable roller coast ride and plunged the nation’s economy into its worst downturn since the Great Depression.

The effects of that downturn are still being felt today, and because of that, real estate professionals and analysts alike are on high alert for the next bubble, and are adamant that we spot it before it’s too late.

So with that all in mind, the question beckons – though home-price growth has slowed this year, did the exuberant months of 2013 shoot us back into bubble territory? The short answer is NO, and we have a couple of great graphs (courtesy of fresh number crunching from Trulia) below to show why.

First, here is a graph that shows where home prices were in the nation’s largest metro areas in 2006’s first quarter, compared to fundamentals: 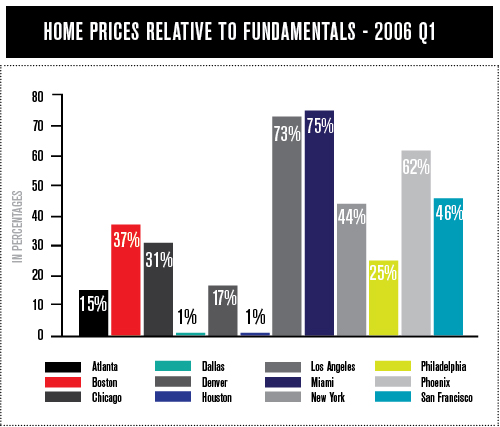 Clearly, the housing market in early 2006 was a bit out of whack, and with the exception of Dallas and Houston, just about every market was inflated beyond fundamentals.

By comparison, take a look at where home prices are right now, compared to fundamentals: 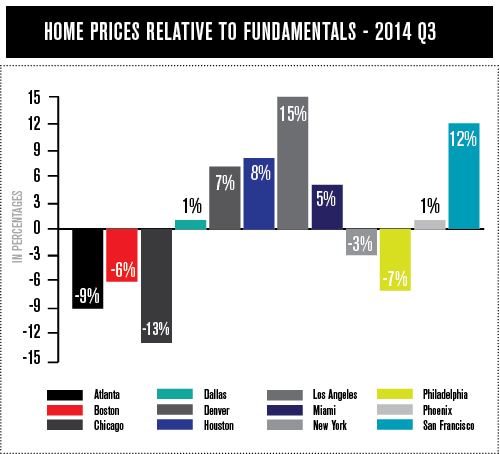 As you can tell, though some markets – Denver, Houston, Los Angeles, Miami and San Francisco – are seeing prices above fundamentals, we’re far from where we were in 2006, while our own local market is not even close to bubble territory.