The nation’s construction sector continued to bump along in February, with all measures putting out lukewarm numbers. Another month, another around of lackluster construction numbers from the U.S. Census Bureau.

According to the Bureau’s latest report, housing starts were down 0.2 percent from January to February, finishing the month at a seasonally adjusted annual rate of 907,000; that’s also 6.4 percent below Feb. 2013’s rate, and though single-family home starts were up 0.3 percent monthly, they were down 10 percent from a year ago.

Meanwhile, the nation’s zeal for multifamily construction continued, with starts for buildings with five units or more jumping 9.4 percent from Feb. 2013; after hitting a 15-year high in 2013, it seems multifamily has lost none of its luster.

So, where can the blame game begin for February’s numbers? Before anyone starts pointing fingers, here are some things to keep in mind:

In the end, February’s report was perhaps best summarized by Kolko in this manner: “Home construction is clearly recovering, but recently looks more like a drunken stagger.”

Check out the chart below for a visual representation: 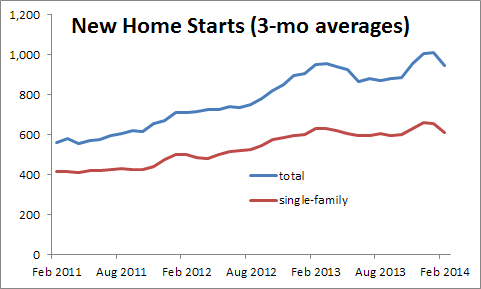