Have rents been increasing in recent years, or is it more that mortgage payments have been falling?

Proponents of renting have often argued that renting is less expensive that owning, and admittedly, the argument makes sense; after all, renters do not have to worry about repairs, insurance or property taxes, among the other additional costs owners accrue. However, an interesting thing happened in 2009 – mortgage payments, which were on a precipitous decline following the bursting of the housing bubble, became less expensive than monthly rents, and as a new study by JPMorgan Funds demonstrates, that trend has continued to the present day.

The study, which is titled “The Aftermath Of The Housing Bubble” and is part of a wider economic report by the bank, also contains interesting economic data on home prices and home inventories across the U.S., both of which have fallen in the wake of the housing bubble. Here is the chart comparing monthly rents with monthly mortgage payments: 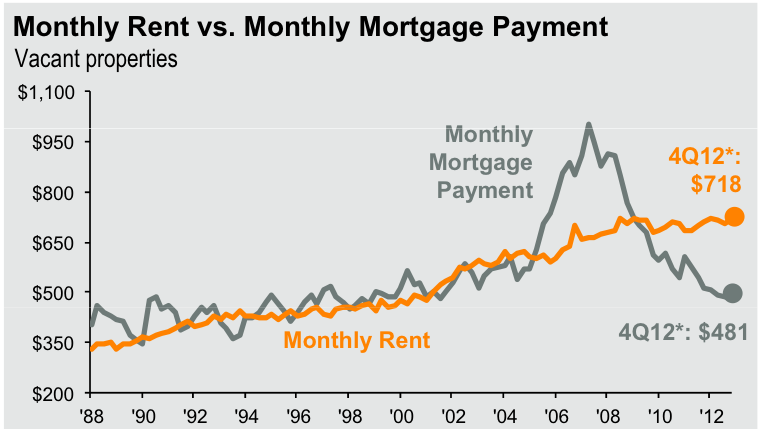 Used with the permission of JPMorgan Funds.

As the chart demonstrates, monthly mortgage payments peaked in 2007 at more than $950, but after the bubble burst, they began a dramatic fall (aside from a short bump in 2010, most likely due to the homebuyer tax credit) to the current level of $481, which takes them back to roughly 2000-2001 levels. Monthly rents, meanwhile, have continued rising, unaffected by what was occurring in the housing market. Thus, rents have steadily increased from $550 in 2005 to $718 today, and in 2009, they finally surpassed monthly mortgage payments.

Have Rents Been Rising, or Have Mortgage Rates Been Falling?

What is perhaps most interesting about the chart is that average rents have not necessarily skyrocketed in price; rather, they have continued rising with inflation.

Of course, there are certainly specific rental markets that have responded more potently than others to the post-bubble housing market, Chicago being one of the more notable examples. As we reported, the release of the latest Trulia Price Monitor showed an interesting contrast in Chicagoland real estate – though asking prices were down 1.1 percent in December from a year ago, asking rents were up 6.5 percent, as more and more homeowners opted to rent rather than own.

Renting on the whole, though, has remained pretty consistent in the last 24 years. What has changed, and what the graph clearly shows, is that mortgages have become much cheaper.