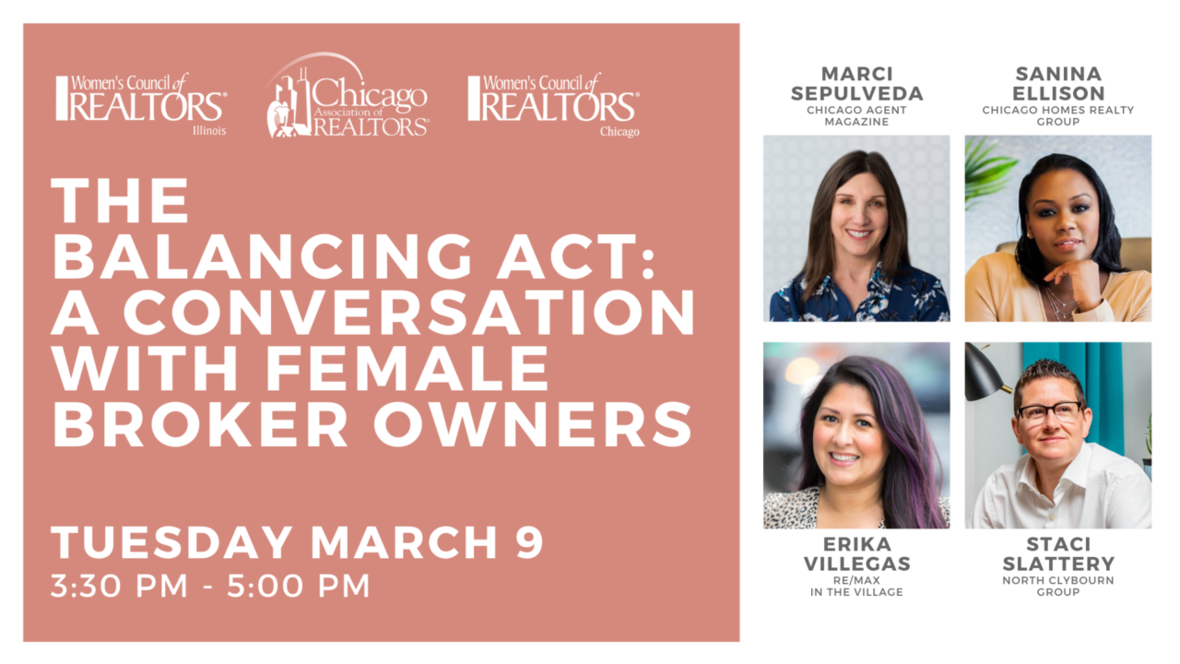 In an industry where women outnumber men almost two to one, there’s still work to be done, according to three of Chicagoland’s top women broker-owners at a forum held by the Chicago Association of Realtors in recognition of Women’s History Month.

The online forum was one of four others that ran weekly through the month of March, which included: “Titans of Industry: Leadership & Pain”; “Meet CAR’s All-Women Executive Team”; “Rise Up: A Fireside Chat with Leading Female Executives”; and “Generating Multiple Streams of Income with Marki Lemons Ryhal”.

Ellison said Women’s History Month is about “leaving a legacy” for the next generation. “I’ve had to make a number of sacrifices and take steps back in order to create opportunities for others in this space, because I don’t see a lot of other people who look like me in this space,” she said. “But I get a lot of women — millennial women — because they see what I do.”

Villegas also said her work empowering women is about leaving a legacy, noting she’s already working to set the example for her young daughter. “It’s not what we say but what we do,” she said. “This is how we grow the industry and leave a legacy of seeing women achieve their dreams and break the glass ceiling.”

Despite the gains women have made in the real estate business, Villegas said she still attends conferences and other events where “there still aren’t enough women in the room.”

All three panel members noted that their business has expanded over the last 12 months. But on the question of whether it’s a good time to make the leap from agent to broker-owner, Slattery said, “I think people have come through this pandemic being very open to helping one another. From that perspective, I think this is as good a time as any.”

Villegas said she made the decision to become a broker-owner after she maxed out on the number of deals she thought she could accomplish alone in a year. “I did 81 transactions in 2018, and I think that was the maximum number for one agent,” she said. “I wanted to figure out what to do next, and I enjoy mentoring and showing people how it’s done.”

Ellison got her license 16 years ago, and it took her about nine years to make the leap to broker-owner. “I created this platform to create an opportunity for others. It certainly took me several years to build what I wanted this culture to look like,” she said. “I’ve taken my time to do that.

“I certainly didn’t want to rush into adding more agents without being able to create a strong support system for them. Now I’m at a place where I can truly do that.”