Despite a dismal decade, NAHB predicts dynamism ahead for homebuilding

In a post this week looking back at the last ten years in homebuilding, National Association of Home Builders Chief Economist Robert Dietz demonstrated how bad the 2010s were for the industry but projected a positive outlook for the 2020s. “The last ten years have seen significant amounts of underbuilding compared to prior decades,” Dietz wrote on the association’s Eye on Housing blog. “There is little doubt that the 2020s will experience more single-family construction than the 2010s as Gen X reaches its peak earning years and millennials increasingly seek out single-family homes for purchase.”

Of course, it’s easy to predict that the next decade will beat out the last one when it comes to single-family homebuilding. After all, the 2010s saw the most dismal building numbers in the past several decades, with only 6.8 million starts. That’s about 37 percent less than the average level of single-family starts between 1960 and 2010, 10.78 million.

The numbers were even worse in the Midwest, which could only claim 15 percent of the decade’s 6.8 million starts. More than three quarters of the decade’s starts occurred in the South and West regions of the U.S.

Dietz pointed out that these numbers are even more disappointing when population growth is factored in. Looking at production numbers in terms of starts per million people, the 1960s saw 47,997 starts while the 2010s saw less than half of that number: 21,288. 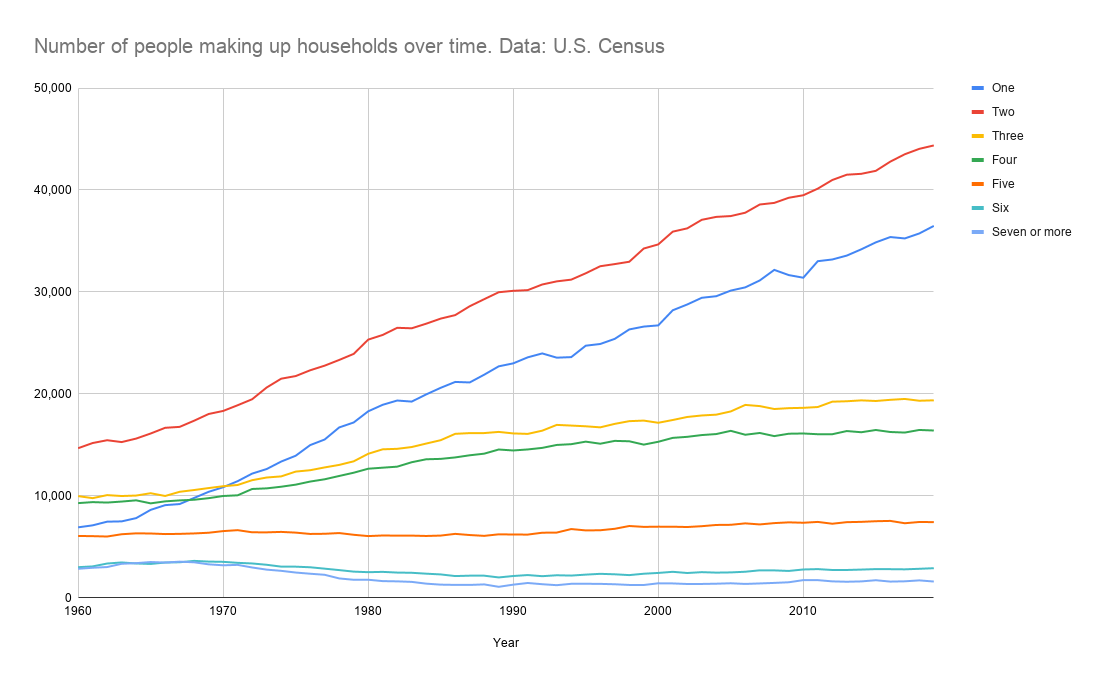 But it’s not just a growing population that should be taken into account; it’s a changing one. In the 1960s, households were bigger on average, meaning more people were living under one roof than there are today. In 1960, the Census Bureau estimated that there were more than 6.9 million households consisting of just one person. In 2019, that number was estimated at nearly 36.5 million. When looking at households with six or more people, the Census only counted 4.51 million of those in 2019, while in 1960 they estimated 5.86 million. That dip comes despite a sizable population increase over that time period overall.

Despite this change in living arrangements, the homebuilding community hasn’t shown much interest in new designs. Indeed, in his 2020 predictions post this week, Dietz seemed to shrug off the idea of low-density infill development to fill this growing need. “Much attention has been given to the missing middle, a useful if somewhat incomplete concept. While the market could certainly use more townhouses and low-rise apartments, the overall housing market is starved for the homes that became the hardest to build in the 2010s due to supply-side headwinds: entry-level, single-family detached homes,” he wrote.

But Dietz went on to write that, despite the supposed demand for this type of home, builders aren’t delivering on it. He noted that, at the beginning of the decade, 59 percent of new single-family homes were smaller than 2,400 square feet and that by 2018, that share declined to 51 percent. Looking at even more modest footprints, 32 percent of new homes were smaller than 1,800 square feet in 2010, a percentage that fell to 23 in 2018.

So what’s holding homebuilding back? Dietz doesn’t come to a conclusion on this but mentioned several contributing factors:

While some of the issues mentioned above may lessen over the next decade, others are realities the market will likely continue to experience. Still, Dietz’ prediction of the 2020s being a “dynamic decade for home building” is a welcome one, and surely many in the real estate industry hope it turns out that way.