The average time it took to sell a home in February was 71 days, down from 74 days a year ago. Available housing inventory totaled 47,108 homes, a 12 percent decline from February 2017, when there were 53,522 homes on the market.

The monthly average commitment rate for a 30-year, fixed-rate mortgage was 4.33 percent in February, an increase from 4.03 percent the previous month, according to the Federal Home Loan Mortgage Corp. In February 2017, it averaged 4.17 percent.

“With the Fannie Mae Home Purchase Sentiment Index decreasing, consumers seem to be apprehensive about future increases in interest rates and some uncertainties about the impact of the tax reform legislation,” said Geoffrey J.D. Hewings, director of the Regional Economics Applications Laboratory at the University of Illinois. “In combination with shrinking inventory and concerns about affordability at the lower end of the price scale, year-over-year sales numbers are forecast to be lower than in 2017.”

“A chronic shortage in the number of available homes on the market is setting this spring market up to be one where buyers are going to have to move quickly and decisively,” said Matt Difanis, president of Illinois Realtors. “We saw an increase in the number of properties which came onto the market in February, but we’re still a long way from having enough inventory to satisfy consumer demand.” 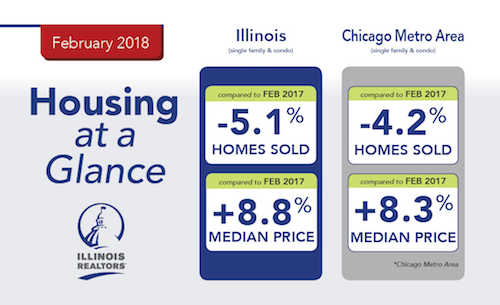