Freddie Mac: Housing market on track for best year in a decade With 2018 right around the corner, Freddie Mac released its report card for 2017. While the economy is marked by robust job growth and low inflation, the housing market has had some hiccups this summer and fall, largely due to low inventory.

Still, the report states that housing market is “on track” to have its best year since 2006; however, there are some obstacles it’ll have to overcome. From market inventory to changing mortgage rates, here’s everything Freddie Mac found in its annual report:

Mortgage rates are down by historical standards, which, because housing prices are outpacing income, is keeping affordability intact. In the beginning of 2017, rates for 30-year fixed mortgage were above 4 percent due to a 0.5 percent increase after the November 2016 general election. By March, however, the rate dropped under 4 percent, which was the peak for the rest of the year.

Cushioned by low interest rates, single-family mortgage origination was stable, while refinance originations are down 35 percent from last year. The report predicts that rates will remain historically low going into 2018 but gradually creep up in 2019.

While 2017 is “on track” to be the best year for the housing market in a decade, a slowdown in the construction of homes is keeping it from being decidedly on top. While single-family homes were produced at breakneck speed, it was not enough to offset the plummet in construction of multifamily homes. And home sales have lost momentum since earlier this year.

As for 2018-19 predictions, Freddie Mac expects construction to increase. This will help to stabilize the market by adding inventory, which will moderate average price growth for homes and drive more sales.

A combination of low inventory, low mortgage rates and strong demand have been largely responsible for home prices accelerating. Home prices in September increased at an year-over-year rate of 6.4 percent nationally. However, when broken down by state, some had increases of more than 10 percent, with the biggest growth in Washington (12.8 percent) and Nevada (11.3 percent). 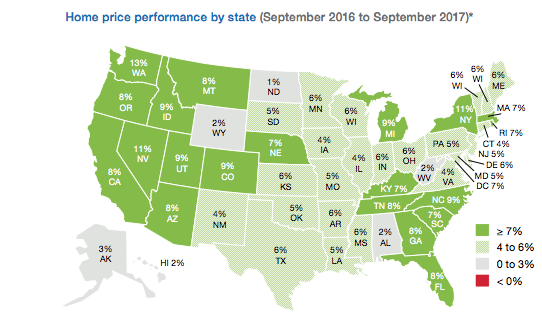