In the last 11 years, student debt in the U.S. has skyrocketed from $241 billion to $1.1 trillion, making it the second-highest form of debt in the country; only mortgage debt has a greater volume.

Analysts have debated just how detrimental student debt is to the economy, and a new study by John Burns Real Estate Consulting, as reported in The Wall Street Journal, has come to some stark conclusions – in 2014 alone, there will be 414,000 transactions lost to student debt, meaning that the burden of student loans will stop the transactions from taking place; assuming a typical home price of $200,000, that translates to $83 billion in lost volume.

The Sizable Impact of Student Debt

Here is how the real estate consulting firm came to its concluding numbers:

Those 29 million translate to 16.8 million households.

Finally, of those 16.8 million households, 35 percent of them (or, 5.9 million households) pay more than $250 per month in student loans; that inhibits “at least” $44,000 per year in mortgage culpability for those consumers.

According to John Burns Real Estate Consulting and The Wall Street Journal, the average percentage of the 20-39 year old age group who purchased homes each year comes out to about 8 percent. The company then used a calculation to see how student debt shaped that number, thus arriving at the conclusions that it did. The one troubling thing? Because John Burns Real Estate Consulting limited its analysis to consumers aged 20-39, it considers its conclusions “conservative.”

Student debt is arguably the most persistent and destructive form of debt today, and it will likely continue to affect housing in the coming years. Here are three reasons why:

1. The Government Has the Power – The federal government wields vast powers when it comes to collecting on delinquent student debts. Not only can it, according to a new study by the New York Fed, report that student debt is past due to credit bureaus, but it can also garnish wages until the debt (plus interest/fees) is repaid and retain tax refunds/Social Security payments until the debts are paid.

2. The Government Gets its Money – Using those means, the government is quite successful collecting on student debts; according to the New York Fed, the federal recovery rates on defaulted direct student loans exceed 70 percent.

3. Bankruptcy is No Help – Though it may seem, in practice, that filing for bankruptcy would help with someone’s student loan debts, that’s anything but the case. In fact, the Bankruptcy Abuse Prevention and Consumer Protection Act of 2005 specifically prevents student loans (both private and federal) from being discharged in bankruptcy, unless the individual can prove the loan caused “undue hardship,” which is quite difficult to prove in court.

Student debt has dramatically reshaped Millennial consumer behavior. According to a new study by Joyce Serido, an assistant research professor at the University of Arizona, half of recent college graduates receive financial support from their family, and an additional 19 percent receive help from spouses/partners.

Here’s a graphic breakdown by The Wall Street Journal on student loan payments: 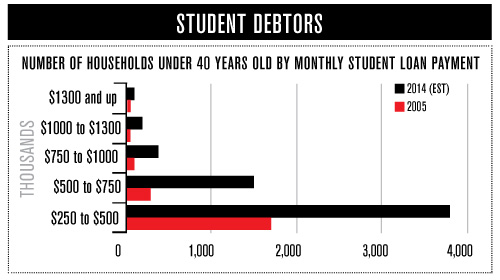 Here’s an infographic from the real estate consulting firm that summarizes its findings: 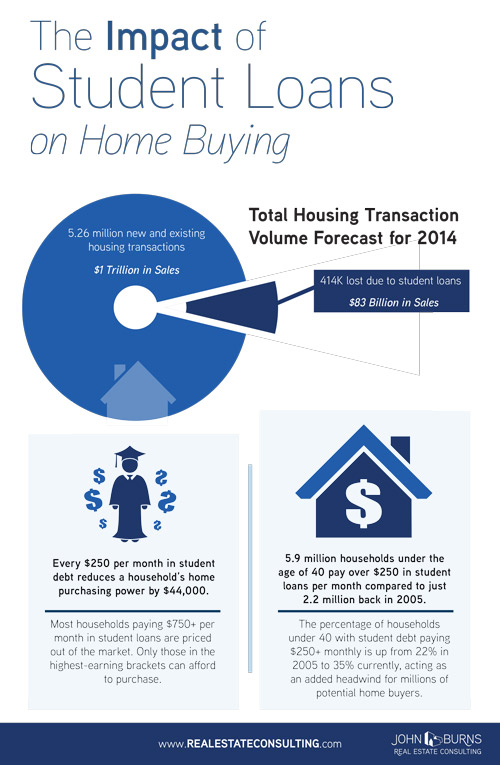