The site of the stalled Chicago Spire condominium property shows promise of coming back to life, receiving several bids from developers. 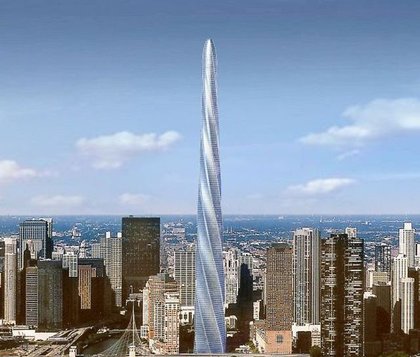 As the housing market recovers, developers are placing bids on the site of the former Chicago Spire condominium property, which was once planned to be the tallest building in North America, but delayed due to construction.

According to people who are familiar with the bidding, Ireland’s National Asset Management Agency (NAMA) received a half-dozen offers in the initial round of bidding for about $93 million in debt it holds on the property.

Among those bidders are DeBartolo Development of Tampa, Florida and Stephen Ross’s Related Cos. of New York. Both bidders are active developers in downtown Chicago.

All of the bids were lower than the debt of the property. However, brokers said that the property receiving any bids at all is a sign that competition for downtown Chicago land parcels is getting fiercer.

“The buzz is out and people want to explore the condominium potential of various sites,” Gail Lissner, vice president of Chicago real estate research firm, Appraisal Research Counselors, said in an interview with The Wall Street Journal.

The Chicago Spire also received interest from its original developer, Garrett Kelleher, who still holds title to the property but lost day-to-day control of it to a receiver in 2010.

Kelleher bought the land for $64 million in 2006 and tapped Spanish architect Santiago Calatrava to design a 2,000-foot-tall, drill-bit-shaped condo tower on the site. Proposed prices for the condos ranged from about $750,000 to $2 million and higher. He initially took out a $54 million mortgage to buy the property, but construction stopped in 2008 as the recession hit. The debt tally has since increased with added debt, interest and penalties.

Last month, Kelleher met with NAMA and proposed paying off the loan in a bid to take back control of the property, which is now overseen by a receiver, according to The Wall Street Journal. This month, Kelleher visited the Chicago Spire site with a potential investor. A NAMA spokesman said the agency couldn’t comment on specific properties but noted that it can only sell an asset to a defaulted debtor if the borrower can fully repay its debt.

The only remainder of the stalled Chicago Spire plans is a cylindrical 76-foot-deep foundation hole and a ramp access to nearby Lake Shore Drive. It was once planned to be a 2,000-foot skyscraper – the tallest in the Western Hemisphere and about 500 feet higher than Willis Tower. Now, it is planned to be a 150-story tower with 2.3 million square feet.