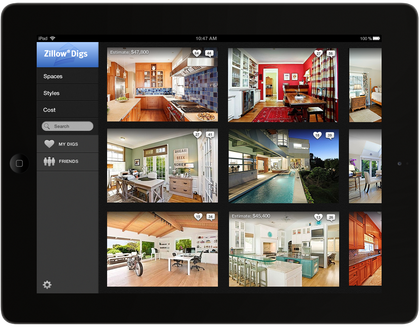 Zillow has expanded beyond the syndication business with ‘Zillow Digs,’ a new remodeling platform in the style of Pinterest.

Viewable on both the Web and iPad, Zillow Digs shows users the real costs of remodeling projects based on where they live, showing the prospective upgrades through a predominantly visual, tablet-friendly style – which, as Zillow explained, is intentional.

“Couch surfing and shopping for home improvement is a very mobile experience, and Digs is the first marketplace Zillow developed on mobile before the desktop, reflecting the company’s increasing mobile utilization,” it explained.

Here’s a screenshot of how Zillow Digs operates: Spencer Rascoff, the CEO of Zillow, said that Zillow Digs was the next natural step for the company.

“Tens of millions of home buyers shop for homes on Zillow each month, and home improvement is a natural next step for us in consumer empowerment and transparency of information to help people make smarter decisions,” Rascoff said.

And it’s certainly not surprising that of the social media models that Zillow could have expanded to, that it chose the Pinterest model. Not only is Pinterest exploding in popularity, but it acclimates itself quite naturally to real estate, what with its visual emphasis.

But what’s your take? Will Zillow Digs diversify the companies business and aid any of your clients, as they mull over remodelings in anticipation of listing their property, or will it go nowhere?