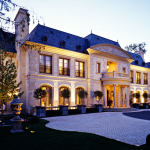 The chateau Le Grand Reve is one of many high-end luxury estates facing difficulties being sold.

Auctions for penthouse apartments, waterfront mansions and grand country estates traditionally carry the stigma of a ‘last resort’ for desperate sellers or banks trying to get rid of foreclosed properties. The upkeep of homes $10 million and above can be astronomically expensive – taxes can run into the hundreds of thousands of dollars a year, let alone the additional costs of staffing, landscaping and other maintenance expenses.  With a market recovering at sloth-like speeds, many high-end homeowners are finding that they either have to make due with the current market, and sell properties at highly deflated prices, or weather the recovering economic storm until home values have risen to a favorable point. Ironic as it may sound given the context, but ‘beggars can’t be choosers’ in today’s market.

Such is the case for chateau Le Grand Reve estate owners Sherwin and Deborah Jarol in Winnetka, Illinois. The Jarol’s 26-room,  six-bedroom mansion; complete with a two-story rotunda and a Tiffany-stained dome; and occupying 25,000 square-feet of prime real estate in Chicago’s North Shore, went to auction in late October. The estate’s original listing price was $32 million. The Jarols, who placed no minimum reserve on the bid price, were unable to confirm negotiations with their highest bidder a week after the auction had taken place. The mansion continues to remain unsold on the market.

As of last September, the listing value of homes priced at $10 million and above fell by nearly 9.5 percent from last year, a stark contrast to the 4.4 percent decline viewed overall in the housing market for the same period, according to Zillow, an online housing tracker.

Though prices for in the high-end market have depreciated in value, the number of high-end listings on the market is steadily increasing. President of the auction company JP King, Craig King, said that in 2010 the company had 11 inquiries for homes over $10 million – so far they’ve had 24 this year. Auctioneer Anthony Fitzgerald of the same company says that the average price of homes auctioned by Premier Estates Auction Co. is up almost 40 percent from where it stood a year or so ago; keeping in mind that these sales are still made at significantly lower prices from their original listing values.

“Eventually, even the people who have unlimited means will throw in the towel at some point,” said George Graham, CEO of Concierge Auctions.