Chicago-based real estate brokerage City Point Realty is inviting potential buyers to attend an upcoming open house event at 2216 W. Armitage Ave. on October 3 and participate in their first-ever Name Your Price open house contest.  Participants will be asked to estimate the sale price of the property based on their experience at the open house.  The person who guesses the price, or comes the closest, will win a $1,000 cash prize.

“We’re very excited to run this promotion,” says representing broker Dan Merrion.  “It’s a new level of interaction between potential buyers and the property that we’ve never experienced before.”

City Point, which has prided itself on being technologically innovative in its business and marketing models, will be relying heavily on social networking sites and word of mouth advertising to promote the event.

The doors of City Point Realty officially opened in 2003 back in their small office at 200 West Superior in Chicago’s River North.  It was started by brothers Brian and Dan Merrion with the goal partnering the latest technologies with the tried and true basics of a traditional real estate company to build a dynamic real estate company that can deliver better marketing and a more personal touch than the “traditional” brokerages.  Since then, they have generated over $100 million in closed sales and nearly 200 closed transactions.  Their working motto is “Real Estate Your Way.”  They are now located in Chicago’s Old Town at 1275 N Clybourn. 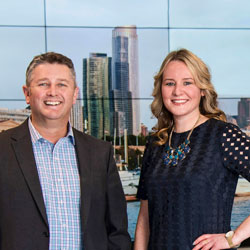