Segregation After Its Outlawing – Sub-Prime Mortgages

The Fair Housing Act also failed in one other area – preventing future cases of housing discrimination.

“Bank redlining is not over,” said Satter, whose current research centers on the finance industry. “There’s no question that subprime lenders as early as the ‘80s, and certainly throughout the 90s and 2000s, were targeting moderate income non-white areas. It’s predatory lending targeted at a particular demographic.”

Research conducted by Jacob Faber, an assistant professor at New York University, determined that in 2006 – just before the collapse of the mortgage market – minority borrowers were 2.4 times more likely to be given a subprime mortgage.

In a recent report, the Chicago Urban League further detailed the effects of sub-prime mortgages on Chicago’s poorest areas, which remain mostly black and mostly in the South and West Sides. 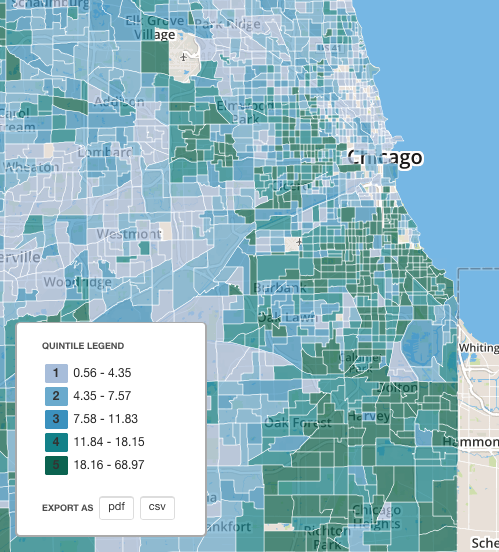 As this map from the Woodstock Institute shows, foreclosure activity in 2014 was heavily concentrated in Chicago’s West and South Sides, where subprime lending was most common.

The report stated that through each phase of the mortgage crisis, African Americans were calculably disadvantaged. Before the crash, they were more likely to receive high-cost subprime loans; following the crash, they were less able to secure mortgages for home purchases; and after the foreclosure crisis, black buyers had “significantly less access to home refinancing loans, making it difficult to bounce back financially from harmful subprime loan products.”

From the housing bubble’s peak (between ’05 and ’07) to the market’s recovery (between ’12 and ’14) mortgage activity fell throughout Chicago by an average of 64 percent. However, in neighborhoods the Urban League describes as “racially concentrated areas of poverty” (RCAP), even the best performing neighborhoods saw more acute declines. In Riverdale, mortgage activity over the same time period dropped 95 percent – only 13 mortgages were issued to the neighborhood between 2012 and 2014. Activity fell by 94 percent in Fuller Park, and 92 percent in Englewood and West Englewood. The least affected of the 19 RCAPs evaluated was Oakland, where mortgage activity still dropped 69 percent – five points above the city’s average.