The easy answer to “Where do you network” is “Everywhere,” but clearly, some places are better for networking than others, especially the five we suggest. 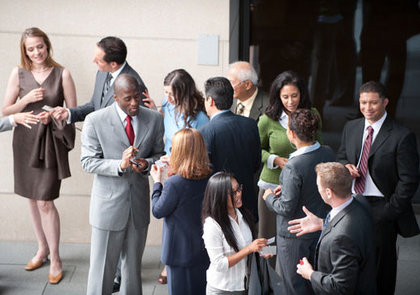 All top producers succeed in unique ways, but if there’s any attribute they share, it’s their peerless networking skills, and the way they casually, even effortlessly, acclimate themselves with potential clients in various social environments.

What environments, though, are the most fruitful for networking? Though clients can be found just about anywhere, there are definitely certain areas that are more natural for networking than others, and here are five to consider:

1. Sporting events – What better way to bond with someone than sports? After all, only the weather generates more daily discussion than sports, and if there’s anything that good networking depends upon, it’s instant affability – if you’re not easy to talk with from the start, why would the person list their home with you?

2. Airplanes – This may seem an unusual suggestion, but bear with us. Planes actually offer numerous chances at connecting with someone – whether it be a bumpy patch of flight, an interesting view from the window seat, an irritating traveler in front of you, there are many opportunities for striking up a connection. And as Inc recently pointed out, there are now apps, such as Planely and Satisfly, that allow you to arrange who you’ll sit by on planes.

3. Art Groups – Whether its painting, drawing, knitting, scrapbooking or acting classes, creativity offers limitless chances for interaction, and you can accomplish great networking in groups or courses designed around creativity. And hey, maybe you’ll come out of it with better drawing skills!

4. Volunteer Groups/Events – These groups are also prime spots for interaction, especially when you’re volunteering around a specific cause. From food kitchens to crop walks and 5Ks, networking is made much easier when you share a strongly held viewpoint with the person you’re communicating.

5. Where the Kids Are – Finally, if you’re a parent, nothing will grant you more networking currency than where your kids are. From little league baseball and soccer, to the dentist and school spelling bees, you’ll be able to commiserate with fellow parents and guardians with ease.

How your clients see production numbers

3 surprising elements of a listing that buyers focus on